The Egg Viper, from Sonic Adventure.

A modified Eggmobile in a mech that looks like a viper.

This giant combat machine has a total height of 130 feet. Laser beams can be fired from both its head and the joints of its tail. The shields that cover both the top and sides of the cockpit have a mechanism that enables them to be moved and used in combat.

The Egg Viper (エッグバイパー, Eggu Baipā?), also known as just the Viper,[2] is a vehicle that appears in the Sonic the Hedgehog series. It is a giant, viper-based combat machine created by Dr. Eggman which was used by the doctor to battle Sonic during the Chaos incident.

In keeping with its name, the Egg Viper is designed after a large flying viper. It has two large red and gray spiked wheels on both side of the cockpit which the Eggmobile can fit inside. The cockpit itself is covered in thick red and gray armor and has two fins on the bottom, yellow and black hazard stribes horizontally along the middle, a single fin on top with a red and gray tube on each side, and a large gray laser cannon down the front which can slide back to reveal the pilot. On the cockpit's rear are three large red and gray flap-like shields. Beneath these shields are a long red and gray segmented tail which has spikes and green spots running down it.

The Egg Viper's head and joints on its tail are equipped with a multitude of laser cannons which can fire intense laser beams, the most powerful which can cause small explosions. The shields that cover both the top and sides of the cockpit also have a mechanism that enables them to be moved and used in combat.[1] When moved into position, these shield can charge up concentrated bursts of energy and launch them at opponents (although such a maneuver leaves the Egg Viper without defenses). The Egg Viper can also detach its spiked wheels and thrust them through midair like spinning sawblades, which will then return to the Egg Viper like boomerangs.

Weapons aside, the Egg Viper is capable of flight through midair. It is also quite powerful and durable, being able to plow through several metal platforms without slowing down or taking damage.

In Sonic Rivals, the Egg Viper appears on the 126th collectible card in the game.

The Egg Viper is fought as Sonic by default. In Sonic Adventure DX: Director's Cut and the 2010 remaster though, it can also be battled as Metal Sonic in the Boss Sub Game.

The boss battle against the Egg Viper takes place across two platforms above a bottomless pit in front of the Egg Viper. Each side of the platforms have a small set of Rings to be collected. Over the course of the battle, the Egg Viper uses different types of attacks according to its life gauge:

After Sonic has completely depleted the Egg Viper's life gauge, the machine will convulse uncontrollably and will attempt a suicidal attack, in which the Egg Viper will ram into the platform Sonic is standing on. A quick Spin Dash or Homing Attack is required. If it succeeds, it kills Sonic alongside the machine and they both fall in the bottomless pit; this can be problematic if Eggman has destroyed many platforms during his attack due to Sonic missing his chances to attack Eggman. If only one platform remains by the time Eggman attempts the suicide assault, Sonic's doom is certain. But once safely evaded, Sonic's story will be cleared. 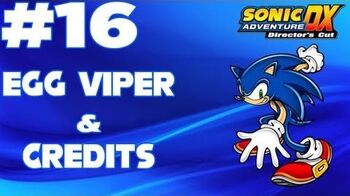 In the Sonic the Hedgehog comic series and its spin-offs published by Archie Comics, the Egg Viper was one of the elements introduced after the second Genesis Wave rewrote reality.

In the Sonic the Hedgehog comic series and its spin-offs published by IDW Publishing, the Egg Viper is one of the many Eggman mechs that Sonic has fought over the years. Its past is virtually identical to its game counterpart's, up until after the events of Sonic Forces. Inside an Eggman testing facility in partuclar, there were four remote-controlled Egg Vipers in different colors and with different powers: electricity, fire, water and wind. These models were used to attack Sonic, Tails and Amy, but they were eventually destroyed when Tangle came to help.

In Sonic X, the Egg Viper was a mecha created by Dr. Eggman as his secret weapon against Sonic after many of his previous plans were ruined by him. He eventually used it to fight Sonic in his Final Egg. After it was destroyed however, the Final Egg itself was also destroyed.