Egg Sweepers are advanced models from the same line as the Egg Bomber. Egg Sweepers use the same bomb attachment to catapult electrical rounds at their targets, and can move on both horizontal and vertical surfaces. However, Sweepers are equipped with cloaking devices. When it’s cloaked, a Sweeper can be difficult to spot. Look for a slight warping effect around the robot’s outline against the backdrop. If a Sweeper is successfully attacked while cloaked, it self-destructs

Egg Sweepers are blue combat robots deployed by Eggman in Sonic the Hedgehog (2006). They are an empowered version of the Egg Bomber used for advanced combat, during Eggman's attempt to take control of Solaris.

The Egg Sweeper resembles a crab. It has a dusty blue color scheme on most of its body, with some silver shades at the end of each leg.

The Egg Sweeper is an advanced model of the Egg Bomber, meaning that its capabilities are more than the devolved version. It is equipped with the same appendage to catapult explosive rounds at its enemies that the Egg Bomber has, but the Egg Sweeper's bombs are electrical, as when they detonated, they leave a burst of electricity behind that is still damaging. It is capable of moving on horizontal and vertical surfaces and can turn invisible. However, it is fairly easy to spot when invisible, as there is a disturbance effect around its outline. If it successfully attacks while invisible, it self-destructs for massive damage and destroys the robots that surround it if there are any. It takes two hits to be destroyed. 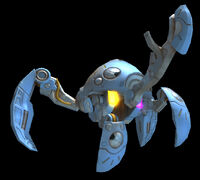 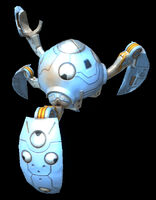