Egg Stingers are combat automatons constructed by Dr. Eggman, deployed by the mad scientist in and around Soleanna during Sonic the Hedgehog (2006). They are named only in the game's official strategy guide.

"Egg Stingers are upgraded Egg Gunners; they’re coated with red paint for easy distinction on the battleﬁeld. Each Stinger is equipped with a cannon on its right arm that ﬁres homing rockets while packing the standard Egg Gunner's vulcan cannon on the left arm. Egg Stingers have little armor, which allows for fast mobility via the back-mounted propulsion systems. The mechs move quickly, zipping around the battlefield so that their attacker can’t get a bead on them."

A variant of the more common Egg Gunner robot, painted red instead of white, the Egg Stinger model trades the Gunner's arm-mounted missile launcher for a homing missile launcher. They have the ability to hover with jet-boosters installed in their legs and have the same light armor as the Egg Gunners, being destroyed with a single attack. 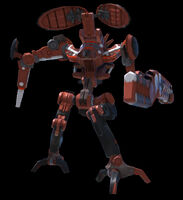