The Egg Spiker, from Sonic the Hedgehog (16-bit).

Sonic the Hedgehog (16-bit) (only appearance)

A modified Egg Mobile with a cannon.

The Egg Spiker[1] is an object that appears in the Sonic the Hedgehog series. It is a modified Egg Mobile created by Dr. Robotnik, who used it during the South Island incident.

The Egg Spiker looks identical to the standard Egg Mobile. Oval in shape, it possesses the same windshield and blue seat as the original Egg Mobile. It also has a cannon attached to its bottom.

The Egg Spiker is capable of flight. It can also drop explosive iron balls using its cannon.

In Sonic the Hedgehog (16-bit), Dr. Robotnik used the Egg Spiker in an attempt to defeat Sonic in Star Light Zone. However, his efforts were left in vain when the Egg Spiker was destroyed by Sonic instead.

Sonic facing the Egg Spiker, from Sonic the Hedgehog (1991).

A modified Egg Mobile equipped with a cannon on its underside that drops explosive iron balls. The player has to hit it eight times to destroy it.

The battle takes place in an arena with three empty seesaws, where Dr. Robotnik will start dropping explosive iron balls from the Egg Spiker. These iron balls will explode, either on contact with Sonic or after a short period of time (indicated by the iron balls blinking red rapidly before exploding). The player is able to utilize the seesaws during the battle, while Robotnik flies around the top of the screen, out of reach of Sonic's Spin Jump.

Rather than aiming to drop iron balls on the player, Dr. Robotnik will drop them on the ends of the three see-saws. By jumping on the opposite side of a see-saw that has a iron ball on it, the playable character can send it flying upwards. If an iron ball strikes the mobile, it will explode and cause damage to it. Also, if the player is standing on a see-saw when an iron ball lands on the opposite side, they will be sent upwards, allowing them to damage the Egg Spiker.

Eight hits are required to destroy the Egg Spiker. After which, Sonic can proceed to open the Capsule and finish the Zone. 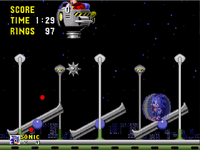