In the Wii version of Sonic Colors, the Egg Spear received a slight update in design. In this game, it is a weapon used against the player by certain Egg Pawns, who will use them for close-up thrusts instead of charging them into the player like in Sonic Heroes. Unlike most other Egg Pawn weapons in this game, the Egg Spears can appear in multiple Areas, regardless of the level theme. There is a different version of the Egg Spear held by the Egg Pawns in Terminal Velocity . 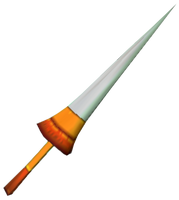