An Egg Shooter, from the Xbox 360/PlayStation 3 version of Sonic Unleashed.

Custom cannons mounted on these Egg Fighters' arms snipe at Sonic as he races past. A special upgrade allows them to keep on fighting, even after their body is destroyed.

The Egg Shooter[1] (エッグシューター[2], Eggu Shūtā?) is an enemy that appears in the Xbox 360/PlayStation 3 version of Sonic Unleashed. They are a model of Badniks created by Dr. Eggman, and a variant of the Egg Fighter that can shoot bullets from their wrists.

Physically, the Egg Shooters are nearly identical to the standard Egg Fighter model. They have a torso in the shape of a little more than a hemisphere, with four flashlights arranged in a rectangle on their front and a flat rounded head on top of it. They also have relatively short legs, with flat feet and circular ankles, and arms that extends almost down to the ground. Instead of hands, however, they have singled-barreled guns on their wrists. Also, unlike the regular Egg Fighters, the Egg Shooters are primarily colored slate gray with brown wrists and shoulders, and red eyes.

The Egg Shooter mostly appears in larger groups with other types of enemies, but there is rarely more than one of them in each location. It is only in very rare cases that they appear in pairs or groups, such as in Rooftop Run and Eggmanland.

The Egg Shooters' only method of attack is by using their guns, which they will start shooting for a few seconds once spotting Sonic before stopping to reload. However, they can only shoot in straight lines. Their bullets have a very long range and can cover most of the field, but there are ways to counter them.

During the daytime Action Stages, the player can avoid the Egg Shooters' shots by moving around, crouching or sliding, and during the nighttime Action Stages, the player can easily guard against the Egg Shooters' shots without it depleting the Shield Gauge significantly. While Sonic can avoid and destroy them easily in his true form, Sonic cannot move out when shot by those shooters in Werehog form due to losing his balance during their attacks.

The Egg Shooters possess singled-barreled and reloadable custom cannons on their wrists, allowing them to fire highly powerful shots over a wide range at a rapid rate. They also have a special upgrade that allows them to continue fighting, even after their body is destroyed.[1] 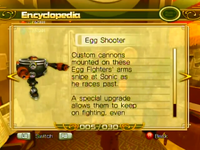