You may be looking for the Egg Burst.

Don't let its tiny stature and cute movements fool you--these guys will start draining your Ring supply as soon as they latch on. Shake 'em off quick or they'll suck you dry!

The Egg Shackle[1] (エッグシャックル[2], Eggu Shakkuru?) is an enemy that appears in Sonic Unleashed. They are a model of Badniks created by Dr. Eggman. These small robots are able to latch onto their opponents and leech them dry of Rings.

In gameplay, the Egg Shackles can attach themselves to Sonic whenever he makes physical contact with them when not attacking, where they start draining the player completely of Rings, eventually resulting in the player losing a life. Additionally, they prevent Sonic from jumping very high or using the Sonic Boost. To shake the Egg Shackles off Sonic, the player has to repeatedly use the Stomp or Foot Sweep.

The Egg Shackles are noted to have cute movements.[1]

The Egg Shackles have the ability to latch themselves onto their opponent and then literally drain the opponent of the Rings they have obtained. 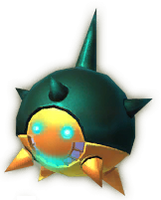