The Egg Scorcher, from Sonic the Hedgehog (16-bit).

The Egg Mobile equipped with a fireball cannon.

The Egg Scorcher[1] is a vehicle that appears in the Sonic the Hedgehog series. It is a modified Egg Mobile created by Dr. Robotnik, who used it during the South Island incident.

The Egg Scorcher looks like the standard Egg Mobile. Oval in shape, it possesses its usual windshield and blue seat. It also has a fireball cannon attached to its bottom.

The Egg Scorcher is capable of flight. It also can fire fireballs using its cannon.

In Sonic the Hedgehog (16-bit), Dr. Robotnik used the Egg Scorcher during his effort to destroy Sonic in Marble Zone. However, the vehicle was destroyed by the hedgehog instead.

In Sonic Mania, and its expansion Sonic Mania Plus, a mini version of the Egg Scorcher appears as one of the many prizes the Gachapandora can drop. In gameplay, it follows the playable character and fires small fireballs, which are harmless if the player is using a Flame Shield. Each mini Egg Scorcher requires three hits to be destroyed.

Sonic facing the Egg Scorcher, from Sonic the Hedgehog (1991).

Modified Egg Mobile equipped with a fireball cannon below it. Requires to do eight hits to defeat it.

Dr. Eggman firebombs the limited footholds with the Egg Scorcher.

The Egg Scorcher is the boss of Marble Zone in Sonic the Hedgehog (16-bit) and the second boss overall in the game. In the original version of the game, it is battled only by Sonic, while in the 2013 re-release of the game, it can also be battled with Tails or Knuckles.

The boss battle takes place on two stone grounds on each side of the screen, with a pool of lava in the middle. Dr. Robotnik will arrive in the Egg Scorcher from the right at start, who drops a fireball on each platform in turn, temporarily covering it in flames. The flame lines are divided into two directions, forcing Sonic to jump between them. Dr. Robotnik keeps doing this pattern until his mobile gets destroyed.

In the Sonic the Hedgehog comic series and its spin-offs published by Archie Comics, the Egg Scorcher was a modified Egg Mobile that appeared in the reality created after the first Genesis Wave. It was piloted by Dr. Eggman to fight Sonic in the Marble Zone, but failed.

In the Sonic X comics published by Archie Comics, the Egg Scorcher, piloted by a fake Dr. Eggman, was encountered by Sonic and Amy in the Marble Zone section of the virtual reality they were trapped in. As the fake doctor approached and attacked the duo, Sonic advised Amy to pick up some Rings for protection against attacks. After doing so, she took out the fake Eggman without restraint but fell into a pool of lava in the process. Thanks to the Rings, however, she was not burned and escaped from the pool with Sonic's help while Eggman fled from the scene.[2] 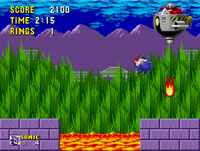