Egg Rounders are combat automatons constructed by Dr. Eggman, deployed throughout Soleanna during the events of Sonic the Hedgehog (2006).

It is a short and bulky robot with two arms who moves either in straight or circle trajectories, and is always clustered in packs. The Egg Rounder can use its arms to tackle its enemies. It also has defense plates, which it can put up to deflect attacks. It has poor armor, taking only one hit to destroy. It has an advanced model, the Egg Commander, which they are rarely seen without. The Egg Commander always acts as a leader to the Egg Rounders, so once the former is destroyed, all Egg Rounders under its command will be destroyed as well.

In Sega Superstars Tennis, the Egg Rounders can be seen in the background of the Tennis court, being developed in Final Fortress. 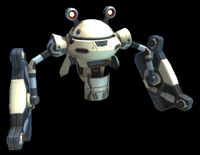