A barren wasteland where neither time nor space exist.

The Egg Reverie Zone is the thirteenth and true final Zone of Mania Mode in Sonic Mania and Sonic Mania Plus. It is only accessible to Sonic the Hedgehog upon collecting all seven Chaos Emeralds. Alternatively, the player can use Level Select (with Debug Mode enabled) to access this Zone with Tails, Knuckles, Mighty and Ray. Knuckles can also access this Zone as a part of a No Save campaign by reaching the end of an "& Knuckles" playthrough with all seven Chaos Emeralds.

A void in space-time, the Egg Reverie Zone displays the final conflict between Dr. Eggman and the Phantom King for possession of the Phantom Ruby, all while Super Sonic attempts to subdue the two and take the gemstone away from the power hungry autocrats. Unlike most other Zones in Sonic Mania and Sonic Mania Plus, the Egg Reverie Zone consists of only one Act and centers around a boss fight.

The Egg Reverie Zone is a purple-hued void of a barren wasteland where time and space act erratically. A single platform exists within the Zone, with several stage lights brightening up the platform.

The Egg Reverie Zone is essentially an empty arena with no gimmicks or objects. Within this Zone, the player can fly by pressing the jump button while in the middle of a Spin Jump (although getting attacked also causes the player to enter flight). While airborne, the player can move freely in all eight directions until the playable character touches the ground. Also, while the playable character is airborne, he is capable of performing a dashing attack by pressing the jump button. Doing so will consume five Rings.

The usual time limit is meaningless in this Zone, as the timer's minute and second values are constantly randomized, indicating the fluctuating space-time in this Zone. As such, it is the only Zone where it is not possible to get a Time Over. The player starts out with fifty Rings instead of zero and to sustain the playable character's Ring-consuming Super State, the player must pick up the Rings that are floating aimlessly around in the Zone. Moving close to the Rings will pull them to the character, similar to the Lightning Shield. Should the player's Ring count hit zero, they will lose a life.

Being the true final boss battle of Sonic Mania, the Egg Reverie Zone casts not one, but two bosses to fight: the Klepto Mobile and the Phantom King. In this zone, Sonic automatically uses the seven Chaos Emeralds to become Super Sonic, a Super State of which is needed for this Zone and must be sustained on Rings.

The fight is tricky at first glance, but it can be a relatively easy finale for a seasoned player. The player faces one boss at a time (starting with the Phantom King); once the player hits the boss or if enough time passes without the player making a move, it will switch to the other. In terms of attack patterns, the Phantom King uses energy spheres, which are either used to form a nearly impenetrable shield around this boss or as projectiles that can take away ten Rings from the player if they hit. The Klepto Mobile on the other hand attacks with rapid punches that can repel the player or a powerful beam.

To defeat these bosses, the player must hit each of them eight times. 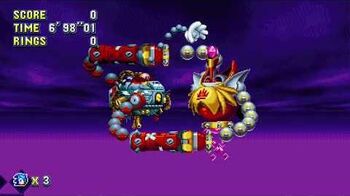