Ability to use various weaponry

The Egg Pawn (Casino version)[1][2][3] is an enemy that appears in the Sonic the Hedgehog series. It is a mass-produced Pawn Series[4] Badnik model created by Dr. Eggman, which is designed for operations in the casino business.

The Casino version Egg Pawns made their debut in Sonic Heroes as enemies. In this game, they only appear in Casino Park, BINGO Highway and Robot Carnival.

In gameplay, the Casino version Egg Pawns can come equipped with a variety of weaponry. These weapons affect their attack patterns and give them a wider attack range. These include:

Casino version Egg Pawns that are not carrying any weapons fight with their fists. If they detect the playable characters, they will start charging at them. Some Egg Pawns also wield shields along with their weapons. Those Egg Pawns that wield shields can use them to negate the damage they would otherwise receive. While these shields can be destroyed with enough attacks, the player can also use the Tornado Jump or a Homing Attack with three Power Cores to blow them away. These Egg Pawns can wield two types of shields:

Occasionally, the Casino version Egg Pawns will simply stand still and not attack despite noticing the player. Each type of Casino Egg Pawn has very little health and awards 200 points when destroyed.

In Sonic Rivals 2, all three Casino version Egg Pawn variants make an appearance as one the collectible cards in the game, and serve no purpose in the story. These cards depict the Egg Pawns as they appeared in Sonic Heroes. To collect each card, the player has to fulfill the following conditions:

Compared to most machines Dr. Eggman has produced, the Casino version Egg Pawns are weak robots. They also possess no special abilities, relying more on their weaponry and tools.

In the Sonic the Hedgehog comic series and its spin-offs published by Archie Comics, the Casino version Egg Pawns are Badniks created by Dr. Eggman. Over time though, several outdated models of these Egg Pawns have been sold to Breezie the Hedgehog, who has them work as her staff at Breeze Media. 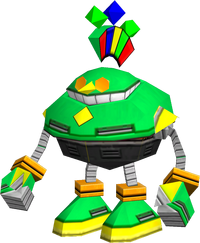 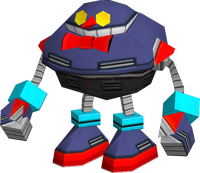