Sonic encountering the Egg Mobile, from Sonic the Hedgehog (16-bit).

Dr. Eggman flees through the flooding maze in his Egg Mobile.

The Egg Mobile[1][2] is an object that appears in the Sonic the Hedgehog series. It is the Egg Mobile, created and first used by Dr. Eggman during the South Island incident.

The Egg Mobile is capable of flight vertically with great precision.

Sonic encountering Dr. Robotnik in the Egg Mobile, from Sonic the Hedgehog (16-bit).

Sonic must follow the Egg Mobile to get out of the Zone, while trying not to drown. Attacking is not required, but hitting eight times will make it explode.

In Sonic the Hedgehog (16-bit), and its numerous ports and remasters, the Egg Mobile is fought at the end of Labyrinth Zone Act 3. In the original game, it is encountered by Sonic. In the 2013 remaster, it can also be fought with Tails and Knuckles.

This boss fight is perhaps the most unique one in the game, as the player has to climb through a tunnel filled with traps such as moving spears and statues spewing fireballs. Along the way, Dr. Robotnik will fly up in his Egg Mobile attempting to escape, while the water will keep rising.

Unlike the other bosses in the game, the player does not need to hit the boss eight times, although it is possible for them to do so. The Egg Mobile is also completely unmodified and without weaponry. Instead, it is more about surviving, as they have to avoid the various obstacles along the way while trying to escape from the water, which can make their character drown.

Once the player reaches the top of the passage, Dr. Robotnik will fly away, and the player will be able to open the Capsule and finish the Zone.

Sonic encountering Eggman in the Egg Mobile, from Sonic the Hedgehog 4: Episode I.

The chase of the Egg Mobile returns with another, unique phase after it. The player needs to hit four times to defeat it during the second phase.

Chase Dr. Eggman up the flooded corridors until he's cornered. Then climb the crushing pillars to bop the baddie.

The encounter of the Egg Mobile is later seen again as a boss in Sonic the Hedgehog 4: Episode I at the end of Lost Labyrinth Zone. At the start of the boss act, the player has to pick up some rings and head to Dr. Eggman who, after laughing, flies away stage right. The route is more wheeling and smoother than before. Like its previous appearance, there are also numerous booby-trapped obstacles like spears, but there are also Badniks as well on the way. Despite the smoother platforming sections, the water once again rises below, while like in original Sonic the Hedgehog, there are no air bubbles on the route, as the player has to pass quickly as possible without drowning. The player is also able to attack the Egg Mobile by doing Homing Attack into it.

After being bounced to the air via a Spring, the player chases Eggman on the linear arena until the second phase of the boss battle starts. Eggman summons two pillars to rise from the ground, enclosing him and the player. Eggman then summons numerous different looking pillars slowly as attempting to crush the player, while the doctor himself flees to the safer place. The player has to head to the same place as well to survive and manage to hit Eggman at the same time. Eggman repeats doing this with different patterns until the player has defeated him, while the player should also memorize patterns and the doctor's movements.

It is possible to hit the Egg Mobile at the beginning of this phase by standing on either end where the pillar rises up from the ground, jump off quickly before getting crushed and then performing a Homing Attack.

After dealing a total of eight hits on the Egg Mobile across both phases, all pillars present are instantly retracted while the Egg Mobile explodes, prompting Eggman to flee with his damaged craft. The player is then allowed to progress to open the Capsule and complete the Zone.

This battle later reappears at E.G.G. Station Zone as a part of the boss rush before the battle against the Death Egg Robot. The chase section is not included, thereby skipping to the second phase of the battle, where the pillars have a new appearance to fit the space-themed aesthetics of the Zone. After four hits, all pillars present are retracted and the player can move to the next boss. 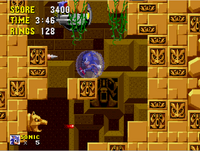 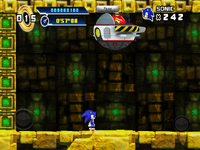