A modified Egg Mobile with a wrecking ball chained to it.

The Egg Mobile-H takes the same appearance as that of the Egg Mobile. Oval in shape, it possesses its usual windshield and seat. However, it also features a long, gray chain with a large, checkered brown wrecking ball in the end of it.

The Egg Mobile-H is capable of flight, although it is incredibly slow compared to the standard Egg Mobile. During the first part of the Death Egg mk.II incident, it was shown that it is able to rotate 360 degrees very quickly to to slam the wrecking ball.

Sonic facing the Egg Wrecker, from Sonic the Hedgehog (1991).

An Egg Mobile equipped with a massive, checker-board pattern wrecking ball. The player has to hit eight times to defeat it.

In the original Sonic the Hedgehog, the Egg Mobile-H is named the Egg Wrecker.[3] It is fought at the end of Green Hill Zone Act 3. In the original game, it is encountered by Sonic. In the 2013 remaster, it can also be fought with Tails and Knuckles.

To defeat the Egg Wrecker, the player must leap onto one of the floating platforms and then Spin Jump into the hovercraft. The only thing the player has to look out for is the wrecking ball itself, which can damage them, although they are able to dodge it easily. After hitting the Egg Wrecker eight times, it will explode while the chain and wrecking ball gets destroyed. Dr. Robotnik will then flee, allowing Sonic to open the capsule, thus freeing all the animals inside of it and completing the Zone.

In the 2013 remaster of Sonic the Hedgehog, the battle arena has been extended to fit the new widescreen aspect ratio while the movement pattern of the Egg Wrecker has been increased in size to match. At the start of the battle, the Egg Wrecker can no longer be damaged until the wrecking ball is completely deployed.

After eight hits, the chain and wrecking ball are destroyed and Mecha Sonic escapes with the exploding Egg Mobile. A Warp Point will appear below the ground, allowing the player to progress to the next part of the level.

Dr. Eggman with Egg Mobile-H at X-Zone, from Sonic Advance.

The return of Egg Mobile equipped with a massive, checker-board pattern wrecking ball. The player has to hit it four times to destroy it.

The Egg Mobile-H reappears in Sonic Advance. It is the first boss of X-Zone. Once again it is this time piloted by Eggman, with an appearance that has been taken directly from the original Sonic the Hedgehog. Eggman will fly down to the arena and then release the classic wrecking ball.

This battle is generally easier than the original Sonic the Hedgehog, as it only takes four hits to defeat Eggman. However, when playing with Amy Rose, the player has to perform the Hammer Jump technique in order to deal damage. Furthermore, the player is now unable to damage the Egg Mobile during its descent into the arena. After taking four hits, the chain and wrecking ball once again get destroyed while the defeated Eggman flies away.

The Egg Mobile as it is seen in Splash Hill Zone, from Sonic the Hedgehog 4: Episode I.

An Egg Mobile equipped with checker-board pattern wrecking ball and new attack patterns. The player has to hit eight times to defeat it.

Dr. Eggman returns in the classic wrecking ball and chain.

The Egg Mobile-H is the first boss of Sonic the Hedgehog 4: Episode I. It is piloted once again by Dr. Eggman in the boss act of Splash Hill Zone. Normally the battle takes place on similar wide arena with two platforms, where Eggman flies down with his Egg Mobile and releases the wrecking ball from the mobile. The first phase of the battle is identical to its previous appearances in past titles though like in Sonic Advance, the Egg Mobile cannot be damaged until the wrecking ball is fully deployed.

Upon taking five hits of damage, Eggman will utilize a new attack; he will retract the ball and flip 360 degrees, slamming it down where Sonic is. However, this also leaves him vulnerable as he retracts the wrecking ball in preparation of using this attack again. The most consistent way to avoid this attack is to stand close to a boundary while standing on a platform and jumping at the moment Eggman flips. Doing another four hits makes the wrecking ball and chain explode, causing Eggman to slowly escape with his Egg Mobile.

The vehicle later appears again in E.G.G. Station Zone, as part of the boss rush before the final boss. The only difference in that Zone is that the platforms move up and down once the player jumps on them, which can make the battle slightly challenging. After receiving one hit, Eggman will then proceed to use the new attack. After hitting the Egg Mobile four times, the player moves on to the next boss of the Zone.

An edition of the Egg Mobile-H re-appears in Sonic Forces. In this game, the wrecking ball is replaced by a spinning saw blade. The player must hit it five times to defeat it. After it is defeated, Eggman will summon the Egg Dragoon.

In the unaired pilot episode of Adventures of Sonic the Hedgehog, Dr. Ivo Robotnik used a Egg Mobile-H-like Egg-O-Matic to take Sonic down. However, the doctor was easily defeated.

In the Sonic the Comic series, Dr. Ivo Robotnik equipped the Flying Egg with a wrecking ball similar to that of the Egg Mobile-H. At the Emerald Hill Zone, he was about to kill Sonic with the Egg Mobile-H-like vehicle, only for a brainwashed Tails to retrieve his senses and defeat the doctor.

In the Sonic the Hedgehog and its spin-offs published by Archie Comics, an Egg Mobile-H-like Egg-O-Matic was used by Dr. Ivo Robotnik in an attempt to defeat Sonic, only to be defeated when the hedgehog used a Power Ring.

Much time later, during Operation: Clean Sweep, the Egg Mobile-H was used by by Snively, but Sonic quickly disposed of the machine.

In the Sonic X comic series published by Archie Comics, a virtual version of Dr. Eggman used the Egg Mobile-H to defeat Sonic in Green Hill Zone, only to be defeated. 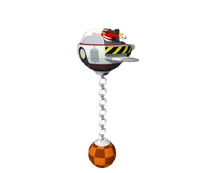