For other uses of the term "Egg Launcher," see Egg Launcher (disambiguation).

These units fire horizontal missiles straight ahead at oncoming targets. The missile's homing feature makes them tough to dodge, but a well-timed Stomp or Sonic Boost can send them flying.

The Egg Launcher (H) is an enemy that appears in the Sonic the Hedgehog series. It is a mass-produced, missile launcher-based Badnik model created by Dr. Eggman which can fire up to two large homing missiles horizontally at their opponents.

The Egg Launchers are humanoid robots with a torso in the shape of a prolate spheroid lying down and have a small and flat head with a single eye on top of it. On each side of their body, they have a rolling joint with a bar attached which bends perpendicularly near the attachment to the body, and have a large and bulky homing missile attached to the end of the of the bar. On the bottom of their torso, they have a vertical bar connected to it with a pair of legs with flat feet attached to the sides. They are all colored vermilion and peach-orange, and have cyan eyes.

The Egg Launchers made their first appearance in both the Xbox 360/PlayStation 3 version and Wii/PlayStation 2 version of Sonic Unleashed. They can only be encountered in the daytime Action Stages/Stages.

In gameplay, the Egg Launchers attack the player by shooting their missiles directly at Sonic. Once launched, the missiles will lock onto Sonic (which is signified by a green target appearing over Sonic on the Xbox 360/PlayStation 3 version) and home onto him over limited distances until Sonic is either hit by them or gets out of range, even after the Egg Launcher who fired them is destroyed. After the Egg Launchers have fired their two missiles, they cannot launch any more, but they can still attack the player up close by spinning.

In the console/PC version of Sonic Generations, the Egg Launchers appear as enemies. In this game, they can only be encountered in Rooftop Run. In gameplay, their attack patterns and the mechanics behind them are the same as they were in Sonic Unleashed. Notably, when spotting Sonic, they will spin in their place before firing their missile shortly after.

The Egg Launchers can fire up to two large and destructive missiles with homing features from their arms which can follow their targets over limited distances. However, they cannot reload their missiles after launching them.

Egg Launcher (H) made a brief appearance in the Sonic the Hedgehog comic series published by Archie Comics. It debuted in Sonic the Hedgehog #281 and has since made its only appearance in that issue. During the Shattered World Crisis, an Egg Launcher, led by its Horde Commander, Silver Sonic, would fight against five Freedom Fighters in Chun-Nan, but failed to defeat them. 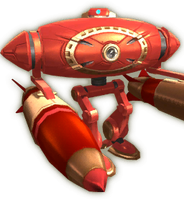