For the boss in Sonic Unleashed, see Egg Lancer.

Egg Lancers are combat automatons constructed by Dr. Eggman, deployed throughout Soleanna during the events of Sonic the Hedgehog (2006).

Egg Lancers mostly appear in groups with other robots, and there are rarely more than two of them in the same location. In gameplay, the Egg Lancers can fire three laser shots per second. These shots can home in on the player, though they cannot move very far before vanishing in a puff of smoke. Although their lasers can be caught with Psychokinesis, they are not very useful against other robots since they are thinner and weaker. They are also equipped with the Vulcan Cannon like their Egg Gunner counterparts.

The Egg Lancers take two hits each to be destroyed. Also, paralysis-inducing objects and moves have an extended effect on them.

Like the Egg Gunner, the Egg Lancers possess a propulsion system on their backs and jet modules on their legs, which allow them to hover and fly through the air. They are also equipped with an energy cannon along with the regular Vulcan cannon. 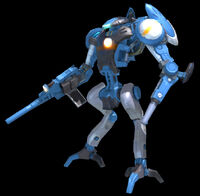 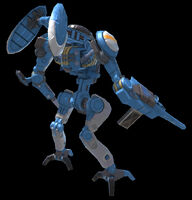