The Egg Lancer, from the Xbox 360/PlayStation 3 version of Sonic Unleashed.

A combination of the Egg Beetle and Egg Devil Ray.

When both the Egg Beetle and Egg Devil Ray were defeated, Eggman combined their designs into this beast, eliminating the weakness of both.

The Egg Lancer is a boss that appears in Sonic Unleashed. It is a robot/mech vehicle that was used by Dr. Eggman to keep Sonic the Hedgehog away from Adabat's Gaia Temple when he conducted his operations with Dark Gaia. The Egg Lancer is a combination of leftover parts from the Egg Beetle and Egg Devil Ray, eliminating the weakness of both machines.

An arachnid-like stag beetle vehicle, that is a combination of leftover parts from the Egg Beetle and Egg Devil Ray with different attacks depending the version of the game.

The Egg Lancer is the third daytime boss in Sonic Unleashed, and the game's overall sixth boss. It is fought with Sonic the Hedgehog, but can first be fought after unlocking its Boss Stage in Adabat's Gaia Gate, which can be done after completing the daytime Acts of Jungle Joyride. The boss battle takes place on a looping road in the jungle.

The Egg Lancer starts out by shooting missiles that leave a pillar of fire. Dodge it while collecting Rings. Should the player start the track all over, it will open its claws, leaving it open to attack. Then, it will follow the track up and the track will run sideways, with the camera focused above Sonic. The Egg Lancer remains behind the floor and fires lasers that move in a zigzag pattern. Avoid them. Then, when the floor ends at a rock face, the Egg Lancer will appear in front of Sonic. It then will slam the rock wall and rocks will come tumbling down. Steer clear of them.

The time needed to "S" Rank is 3:30. Failure to make that time will yield a "C" Rank. Therefore, no Sun Medal will be awarded. 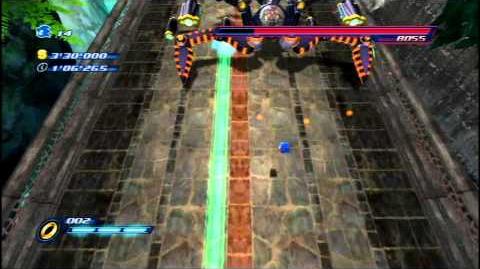 An arachnid-like stag beetle vehicle, that is a combination of leftover parts from the Egg Beetle and Egg Devil Ray with different attacks depending the version of the game.

The Egg Lancer is the third daytime boss in Sonic Unleashed, and the game's overall seventh boss. It is fought with Sonic the Hedgehog, but can first be fought after unlocking its Boss Gate in Adabat's Entrance Stage, which can be done by clearing the daytime version of Jungle Joyride Act 1. The boss battle takes place on a looping road in the jungle.

The Egg Lancer starts out by shooting lasers along the sides of the arena before opening its claws, which is when the player can attack it. It then goes up the path and hide behind the mesh floor below. Meanwhile, it shoots a bunch of stationary lasers. Simply Quick Step around them. Then, it will fire two lasers on the sides of the road that close in on Sonic before coming back on the road to attack Sonic with its claw. Boost into the Egg Lancer at this point before Sonic gets hit by the lasers. The track will then curve downward and Sonic will drop on to a platform below, which is rigged with lasers everywhere. Jump and Quick Step when necessary. After getting past that, the Egg Lancer will fire lasers and open its claws again. Use this opportunity to Hit it again. The player will then have to do a Real-Time Interaction jump pad section, where the last one is a three button QTE. If the player can do this, they will deal massive damage to the Egg Lancer.

On the second lap, the Egg Lancer will fire lasers down the middle of the track below. If the player stays in the middle, Sonic will actually fall a little to the right. After it is finished, hit it once more. When following the Egg Lancer back to the mesh wall, it will shoot a line of lasers while the top laser moves forward, followed by the next one, and so on. Before the laser in front of Sonic moves forward, Quick Step right. They will then move back, starting with the top. Quick Step right when the one behind Sonic moves back. It will then release a line of bombs that will move in a similar pattern. Repeat the process with the bombs, then boost into the Egg Lancer. When Sonic fall down to the next platform, it will be littered with fireballs in different pattern. Quick Step around them and hit the Egg Lancer again. If the player has taken every opportunity to hit it, they should can it off in upcoming Real-Time Interaction section. 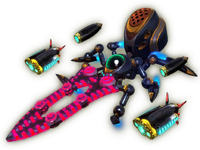