The Egg King (エッグキング, Eggukingu?) is the final boss of Sonic Rush fought at Unknown. It is controlled by either Eggman Nega (if as Sonic) or Dr. Eggman (if as Blaze).

Egg King is a giant robot piloted by Eggman or Eggman Nega. The head has an Egg Mobile on it with a mouth guard. It also has spiky shoulders and big pillar-like hands with no fingers. Being a flying mech, it has no legs. It also has a triangular-shaped lower part with three fin-like blades around it. The character you are playing as determines the robot's color scheme:

The player must dodge hits and shockwaves or take damage. The arms must be knocked back to cause Eggman/Eggman Nega to go to one side of the ring and start "punching" the arena, sending out various shockwaves. When the arm gets stuck, the player must continue up the arm and attack the cockpit where Eggman/Eggman Nega pilot the bot. However, the pilot of the robot will try to shake their opponent off before the player reaches the cockpit, so they must hold on to avoid being knocked off (by holding down on the d-pad). After long, the robot slams both of its two fists onto the arena. A hit like this causes an instant death; however, this can be slammed back like a normal hit, a long as the fists do not directly contact the player. As the battle transgresses, the Egg King will begin firing cube-like objects at the arena that send out an electrical shockwave, and once in a while, a continuous wave that takes patience and precise movements to avoid. The Egg King will also fire lasers from its mouth that the player must avoid. The player again waits for the robot to slam its fists into the arena, sometimes at such a fast rate that it is almost impossible to retaliate. When the player finally lands the next to last hit, Eggman/Eggman Nega within the Egg King gets furious and determined to destroy their enemy for good.

The Egg King will then attempt to destroy the platform by slamming into it three times. The player must jump on its head again after its third time to finally stop the Egg King, which Eggman/Eggman Nega were too angry to realize. If the player takes too long to hit the Egg King, it will finally crash through and shatter the platform, causing the player to lose a life. 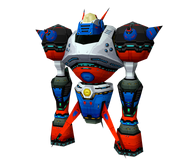 Egg King
Add a photo to this gallery