Blaze's version of the Egg King.

The Egg King[1] (エッグキング, Eggukingu?) is the final boss of Sonic Rush fought at Unknown. It is controlled by either Eggman Nega (if as Sonic) or Dr. Eggman (if as Blaze).

The Egg King is a giant robot piloted by Eggman or Eggman Nega. The head has an Egg Mobile on it with a mouth guard. It also has spiky shoulders and big pillar-like hands with no fingers. Being a flying mech, it has no legs. It also has a triangular-shaped lower part with three fin-like blades around it. The character you are playing as determines the robot's color scheme:

Over the course of the battle with the Egg King, this boss will make use of the following attacks:

When the Egg King has one hit point left, it will stop using all of its previous attacks and perform one final attack. During this move, it will attempt to destroy the playable character's platform by slamming into it three times. To overcome this attack, the player must jump into its head after its third time and finally defeat the Egg King. If the player takes too long to hit the Egg King however, it will crash through the platform and shatter it, causing the player to lose a life. 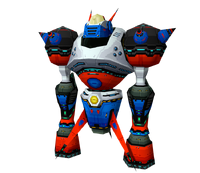