The Egg Keeper, from Sonic Adventure.

Egg Keepers bear many key similarities to the other units in the E-100 Series, including an egg-shaped body and flat head. Their main torsos are blue-gray with white and round shoulder joints and an orange stripe around their torsos' lower half. Also, on the front of their torsos they have a gray vertical row with a red light on top of it. Instead of legs, they have a gray hover engine with yellow and black hazard stripes on the bottom of their torsos. They also have long, spear-like arms with sharp, white ends and red, narrow forearm plating. Beneath their head plates, which have an orange stripe around them, they have a flat gray head with a pair of cyan eyes.

In gameplay, Egg Keepers appear either alone or in groups. They normally remain still until the player gets nearby, upon where they fling their craniums off them like saucers. These saucers will hover around overhead, sweeping the ground with a tractor beam-like field. Get caught in this field and the playable characters will get paralyzed for a few seconds, allowing the Egg Keeper to rush in and attack them with their body. Egg Keepers can only be destroyed with the Spin Jump, Homing Attack, Hammer Attack or gun fire when their heads are detached: get too close when they are whole and they will simply knock the player's attack away with their arms.

In Sonic Rivals 2, the Egg Keeper appears as a collectible card. This card can be collected after getting the high score in battling the Egg Phantom at Mystic Haunt Zone.

The Egg Keepers are capable of levitation. They can also detach their heads and send them flying through midair life a UFO. While in the air, their heads can emit a tractor beam-like field that can paralyze anyone who enters it.

In the Sonic the Hedgehog comic series and its spin-offs published by IDW Publishing, the Egg Keepers are Badniks created by Dr. Eggman. Their past is virtually identical to their game counterparts', up until after the events of Sonic Forces. Several of them first appeared when they emerged to guard an abandoned Eggman base near Windmill Village. 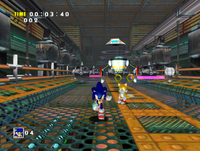