"Egg Hunters are wasp-shaped that fly slowly through the air, seeking targets with a single ocular unit mounted directly on the head. The Egg Hunter is surrounded by up to six pods that hover equidistantly from the mech. When the robot has acquired a target, their pods will extend their reach outward and fire searing lasers. These lasers may be fired along the same plane as the pods, or concentrated on a single target. The mech can survive without its pods-they are only a weapon system. Destroying the pods decreases the robot's attack potency, but to eliminate the mech completely, you must attack the core unit. Pods can also fire a more powerful Vulcan Cannon."[1]

Egg Hunters are some of the least common enemies in the game, second only to the Egg Keeper. They attack with the six pods circling them, which have two means of attack, making them relatively aggressive. Their first attack method is to use their Vulcan Cannon where they shoot bullets that take away one Ring per hit. These cannons can target the player wherever they are. Their second attack is volcanic lasers which may be fired along the same plane as the pods, down on the ground, or concentrated on the player. In Radical Train, the Egg Hunters can also turn invisible.

Dr. Eggman programmed Egg Hunter robots to attack any opposing forces that came their way, namely Sonic the Hedgehog, Shadow the Hedgehog and Silver the Hedgehog.

The Egg Hunter robots are excellent robots gifted with flight capabilities, some of which were given the ability to turn invisible similar to the Egg Sweepers. They also have additional artillery in the form of six pod units, which hover around them at all times (until destroyed). For armaments, they can shoot bullets from their Vulcan Cannons.

When a target arrives, the Egg Hunter robots will shoot bullets from their Vulcan Cannons at their target with several second-long intervals between every sixth shot. 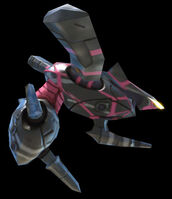