The Egg Hawk, from Sonic Heroes.

The Egg Hawk (エッグホーク, Egguhōku?) is an object that appears in the Sonic the Hedgehog series. It is a mass-produced, hawk-based aircraft designed for combat by Dr. Eggman. It was used by Neo Metal Sonic to combat Teams Sonic, Dark, Rose, and Chaotix early on during their first journeys.

The Egg Hawk is an aircraft themed heavily around a hawk, as the name states. It is mostly red with a streamlined bird head on the front that possesses menacing black eyes, a yellow beak with a machine gun mounted in its mouth, and spiky flares around its neck. On the forehead of the Egg Hawk is also a cockpit that the Egg Mobile can fit into (or eject from). Meanwhile, its main body possesses a white underbelly and two yellow vent intakes on top of its back. Its wings on the other hand are straight with extra gray metal plating close to the body, and on the end of them are round and adjustable yellow rotors with gray frames and three feather-like protrusions on the outer rims. Also, below each wing is a round and yellow platform with a red upper rim and three gray claws protruding from the front, making them resemble hawk feet. Attached to these plaforms are also artillery guns that can be operated manually. Lastly, on the rear are two rocket exhausts, and above on them the Egg Hawk has a dual tail with gray and yellow flaps for a vertical stabilizer.

The Egg Hawk is capable of flight at speeds almost rivaling those of speedsters like Sonic, Amy, Shadow, and Espio. Its adjustable rotors even allow it to fly in reverse and hover in midair. It is also armed with a functional machine gun and additional artillery guns, although the latter are needed to be operated by secondary pilots.

In Sonic Heroes, Neo Metal Sonic (while disguised as Dr. Eggman) used an Egg Hawk for each of his separate confrontations with Team Sonic, Team Rose, Team Dark and Team Chaotix near Ocean Palace. In each encounter with the teams, however, the Egg Hawk got taken down by the heroes and blew up, forcing Neo Metal Sonic to retreat in the Egg Mobile.

In Sonic Rivals, the Egg Hawk appears on the 129th collectible card.

The Egg Hawk, from Sonic Heroes.

A hawk-based aircraft armed with guns. Chase the Egg Hawk down before attacking it until its health is depleted.

The Egg Hawk is the first boss of Team Sonic, Team Rose, Team Dark, and Team Chaotix's storylines in Sonic Heroes. Each team fights the Egg Hawk immediately after clearing their version of Ocean Palace.

The stage where the battle takes place on consists of an endless series of sand islands shaped like circular arenas. These islands are connected to each other by stone paths over a bottomless sea.

The Egg Hawk is a relatively simple boss. In the arena for this boss, the player starts out on a stone road surrounded by white pillars on the sides, which the Egg Hawk destroys along the way with its wings. When beginning the fight, the player has to chase after the Egg Hawk, which will start shooting at the playable characters with a series of bullets from its machine gun while flying backwards. It will also use the Egg Pawns onboard it by having them use its artillery guns to shoot at the playable characters as well, giving the player a total of three sources of shots to avoid while chasing the Egg Hawk. If the playable characters fall behind the Egg Hawk by a great distance, the Egg Hawk will fly up to them. When the Egg Hawk has been chase to one of the circular sand islands, it will land on it and initiate its "Rotary Attack", which involves it turning around slowly while shooting a series of bullets from its available weapons. Additionally, Cannon Flappers will sometimes appear on the sand island to assist the Egg Hawk in combat. The stone paths are also sometimes guarded, mainly by Egg Pawns with Egg Spears, which the player can either break through or avoid all together. 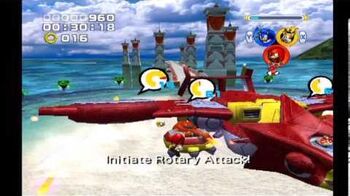 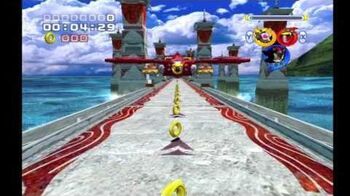 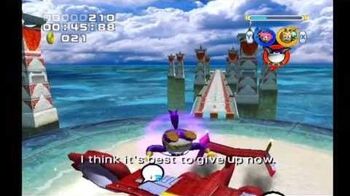 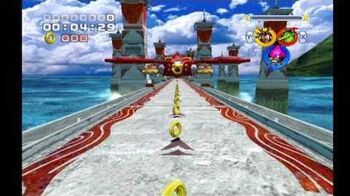 In Ring Race of 2P Play mode in Sonic Heroes, the Egg Hawk makes an appearance in the Egg Treat stage.

In the Sonic the Hedgehog comic series and its spin-offs published by Archie Comics, the Egg Hawk appeared as a battleship used by Dr. Eggman.

In the Sonic the Hedgehog comic series published by IDW Publishing, the Egg Hawk is a battleship used by Dr. Eggman. Its past is virtually identical to its game counterpart's, up until after the events of Sonic Forces. Dr. Eggman took off in the Egg Hawk, alongside a Balkiry squadron, when he learned of an attack on one of his Eggnet hubs. When he got there, he found Zavok, who attacked him with his local robots. Although the Egg Hawk was damaged in the battle, Eggman managed to win the battle by bombarding the hub until Zavok was buried under its rubble.