An Egg Pawn with an Egg Gun, from the Wii version of Sonic Colors.

The Egg Gun[1] is an object that appears in the Sonic the Hedgehog series. It is a model of laser handguns used primarily by the Egg Pawns of the Eggman Empire, giving the mass-produced machines ranged firepower against Eggman's enemies.

The Egg Guns first appeared in Sonic Heroes as one of the standard weapons wielded by several Egg Pawns. In this game, they are colored in a darker shade of orange. They are capable of rapid fire for several seconds which can damage the player from afar. Typically, the Egg Pawns angle their shots downward and fire in a sweeping motion.

In Shadow the Hedgehog, the Egg Gun was redesigned with a yellow magazine and a cyan fin light. Humorously, it is massively oversized compared to Shadow's size. In this game, it is a gun-type weapon usable by both enemies and the player. In gameplay, they are only found in certain Stages, such as in Cryptic Castle. They are once again wielded by Egg Pawns, who will use them against the player.

Egg Guns can be dropped by defeated Egg Pawns that wield them or released from breakable Containers. Touching one will make Shadow pick it up automatically, and pressing

(whether on the ground or in mid-air) will fire it. As a gun, the Egg Gun can shoot enemies from a distance (targets within range will be automatically targeted) at a rapid rate, but its shots are weak. An Egg Gun has a total of twenty shots, and once those run out, it becomes useless. However, it can be reloaded with another twenty shots by picking up another Egg Gun.

In the Wii version of Sonic Colors, the Egg Gun is a weapon used by certain Egg Pawns against the player. During the Acts, they are used to fire rapid shots at the player from afar, like from the background.

In the console/PC version of Sonic Generations, the Egg Gun is a weapon used exclusively by the Egg Pawns in both Acts of Seaside Hill. Like in Sonic Heroes, it is capable of firing rapid shots at the player.

In the Sonic the Hedgehog comic series and its spin-offs published by IDW Publishing, the Egg Gun is a tool used by the Egg Pawns. There is also a golden version of the Egg Gun designed for Egg Knights. 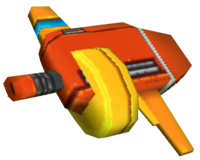