The Egg Golem, from Sonic Adventure 2.

The Egg Golem (エッグゴーレム, Eggugōremu?) is a character that appears in the Sonic the Hedgehog series. It is a giant Egyptian-themed robot created by an ancient civilization to serve as the guardian of Pyramid Cave.[1]

The Egg Golem is a colossal humanoid robot with armor made of beige stone. His head resembles a human face with a pharaoh's headdress on it.

At some point in the past, the Egg Golem was created by an ancient civilization and stationed as the guardian of Pyramid Cave. Sometime later Dr. Eggman would find it, and attach a restraining device to its head in order to force it into serving him.[1]

In Sonic Adventure 2, the Egg Golem was called forth by Eggman to destroy Sonic and his friends when they reached the center of the base. Though shocked at the size of his opponent, Sonic engaged the Egg Golem and eventually disabled him by landing a kick on his restraining mechanism. His restrains now broken, the Egg Golem started rampaging and soon targeted Eggman, forcing the doctor to destroy it.

Like many of Dr. Eggman's own creations, the Egg Golem is obedient, silent and unwaveringly dedicated to his master's orders, as long as his restrains are in place. It appears to lack in intelligence though, given the primitive and often brutish fighting methods that are used.

Extremely large and sturdy, the Egg Golem has impressive strength, capable of moving around in quicksand without hindrance and hit with enough force to topple platforms and create powerful shockwaves. He also possesses an outer armor made of rock which makes him very durable, as it takes several shots from the Volkan Cannon to penetrate his armor.

The Egg Golem possesses articulated joints, allowing him to rotate both his head and torso 360 degrees around. Though also not near superhuman, the Egg Golem is fairly fast for his size and structure, his swings being able to keep up with even Sonic's speed. He can also generate an electrical aura that can shock anyone who touches it.

The Egg Golem possesses a number of weak spots, the most noticeable being the restraining mechanism on his head. If that is destroyed, it will return freedom to the Egg Golem. He also has weak spots under his armor, though they are protected by said armor.

The battle takes place on a ring of platforms with the Egg Golem in the center. Below is quicksand which will eventually pull the characters into a bottomless pit. However, Sonic can avoid sinking by jumping repeatedly. To get up from there, the player has to use the nearby Pulleys.

The Egg Golem starts out by trying smash Sonic with his fists, offsetting and eventually shattering segments of the platform. This can be dodged by moving out of the way. After that, he will stick his arms out and whirl around like a tornado for a sweeping attack. This attack can be avoided by either getting off the platforms, jumping over the hands, or hiding in recesses. It takes the Egg Golem a moment to recover from each attack, which allows the player to counterattack.

While the Egg Golem recovers, run around behind him and jump up the ledges protruding from his back. The top three ledges in particular are marked with yellow symbols that the player can use to Homing Attack to the top. From the top ledge, the player can attack the Egg Golem's head, damaging him. After three hits, the Egg Golem will smash his whole head into the platform, instantly shattering whichever segment he strikes. Land two more hits, for a total of five, to defeat the Egg Golem. 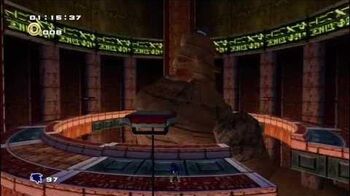 The Egg Golem, from the 2012 remaster of Sonic Adventure 2.

The battle takes place on a ring of platforms with the Egg Golem in the center. Below is quicksand which will eventually pull the characters into a bottomless pit. Unlike Sonic, Dr. Eggman's Eggwalker will sink immediately in this quicksand. To get up from there, the player has to use the nearby Pulleys.

Like with Sonic, the Egg Golem starts the fight by hammering with his fists, offsetting and eventually shattering segments of the platform. This can be dodged by moving away. After that, he sticks his arms out and whirl around like a tornado for a sweeping attack. This attack can be avoided by either getting off the platforms, jumping over the hands, or hiding in recesses. Between each attack, the Egg Golem a moment to recover.

Begin by shooting at him with the Volkan Cannon until one of the cracks in the Egg Golem's chest opens up. When it does, lock-on onto the exposed mechanical parts three times, and fire the Lock-On Missile. Repeat this process with the other two cracks to finish him off. Eventually, the Egg Golem will smash his whole head into the platform, instantly shattering whichever segment he strikes. It is advised to just keep running in a circle, but if the Health Gauge gets low, Hover down onto the platforms below to find some Rings and a Health Item Box. 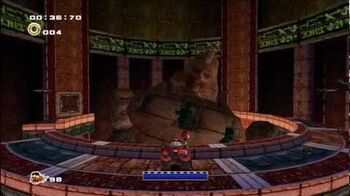 In Sonic X, the Egg Golem appeared during the Shadow Saga. He was remotely controlled by Bokkun, who used it to fight Sonic and Knuckles. Eventually, Cream stole the remote control from Bokkun and made the Egg Golem chase him into the desert. He later appeared in the desert during Super Sonic and Super Shadow's fight against the Final Lizard.

In the Sonic the Hedgehog comic series and its spin-offs published by IDW Publishing, the Egg-Golem is a mass-produced robot created by Dr. Eggman. One of them served as the guardian of his abandoned pyramid base, where it was being controlled by a family hiding there. Rough, Tumble, and Rouge eventually stumbled upon the Egg-Golem during their trip to the pyramid, with Rough and Tumble managing to destroy the robot with their teamwork.