Egg Gauntlet Zone is a Zone intended for use in the 2013 remaster of Sonic the Hedgehog 2. It was meant to serve as a boss rush mode, but was scrapped in favor of the original boss arenas that became Boss Attack Zone.

Egg Gauntlet Zone was the first attempt at a boss rush mode for the 2013 remaster of Sonic the Hedgehog 2. The Zone featured an original mechanical scenery with a drab gray color palette. Sonic Team, however, preferred the original boss arenas, and so the Zone was replaced by a Zone in which the original arenas were placed back-to-back with no significant changes.[1] 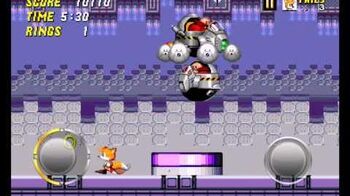