This article is about the stage in Sonic Heroes. For the armada of battleships, see Eggman Fleet.

The Egg Fleet, from Sonic Heroes.

An immense group of flying battleships built by Dr. Eggman.

The sky above the Earth

Muhahaha... you fools must all have a death wish? Witness this invincible battleship, built by the hands of a genius. Its power... unmatched throughout the universe!

The Egg Fleet is the thirteenth stage in Sonic Heroes.

Set amidst Dr. Eggman's armada of heavily-armed aerial battleships, this stage has the four teams fighting their way across the stratosphere, moving from one battleship to the next.

After Neo Metal Sonic (disguised as Dr. Eggman) launched the Egg Fleet near Bullet Station and the four teams passed through Mystic Mansion, the teams have managed to find their way countless miles up in the air, reaching the edge of space in order to take on the doctor's aerial armada.

As the teams stand on the edge of the fleet, they each stay true to the goals they set when starting this adventure. Though over their three-day time limit, Team Sonic is determined to halt Dr. Eggman's plans and save the world. Team Dark is going on a manhunt to find Eggman; Shadow is trying to find out who he really is, Rouge is attempting to get Eggman's treasure, and E-123 Omega wishes to get revenge on his creator. Team Rose is on the lookout for Sonic, Froggy, and Chocola, convinced that they must be somewhere within the Egg Fleet. Team Chaotix are nearing the end of their assignment, as they are directed by their client to infiltrate the fleet undetected.

There are many choices of paths and plenty of opportunities for Rings, Power Cores, and extra lives in this stage. Journeying through this stage requires the teams to travel across the countless ships within the Egg Fleet, with grinding on rails serving as the main passage between minor fleets and propelled flight to reach the larger fleets.

The paths in this level are covered with cannon fire, Laser fields, several bottomless pits, and waves of powerful enemies, bringing the player's skills to the ultimate test. The enemies here are the toughest ones yet; E-1008 Falcos fly through the skies while the highly advanced E-2000 robots stand guard over sealed doors, along with Egg Pawns which are out patrolling the decks. 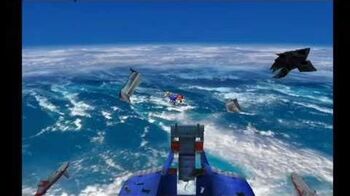 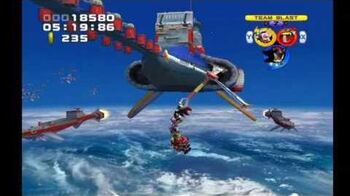 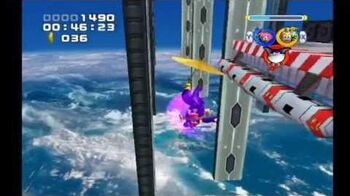 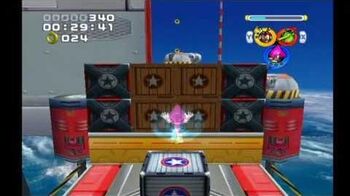 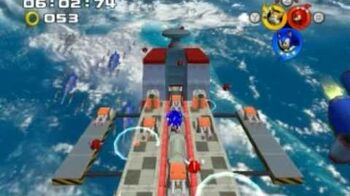