For other uses of the term "Egg Fighter," see Egg Fighter (disambiguation).

The powerful steel shields these Egg Fighters carry can easily deflect most attacks. It would take a supersonic blast to knock away their defenses, or someone quick and clever enough to attack them from the rear.

The Egg Fighter: Shield[1] (エッグファイター・シールド[2], Eggu Faitā Shīrudo?) is an enemy that appears in Sonic Unleashed. They are a model of Badniks created by Dr. Eggman, and a variant of the Egg Fighter that wield a large shield to protect themselves from attacks.

The Egg Fighter: Shields are identical to the standard Egg Fighter model. They have a torso in the shape of a hemisphere, with four flashlights arranged in a rectangle on their front and a flat cap-shaped head on top of it. They have relatively short legs, with flat feet and circular ankles, and four-fingered arms that extend almost down to the ground. They are colored steel blue and silver, and have purple eyes.

There are several ways to bypass the Egg Fighter: Shields' shields. On the Xbox 360/PlayStation 3 version, in the daytime Action Stages, the Egg Fighter: Shields can be attacked with the Homing Attack if the player strikes them before they can put up their shields, and in the nighttime Action Stages the shields can be broken if hit with strong combo attacks or be dropped when the player initiate a Critical Attack. Additionally, the shields cannot block a Sonic Boost or an attack from the rear, and deflecting a Homing Attack will leave them vulnerable to another.

As an Egg Fighter model, the Egg Fighter: Shields possess above average physical strength, enough to let them move barrels at least three times their own size and easily carry large steel shields.

The Egg Fighter: Shields are shown to possess a degree of hand-to-hand combat skills, being capable of engaging in close combat with others by using their bare fists. They are also efficient in using their shields defensively.

Each of the Egg Fighter: Shields carry a single large and powerful shield made of steel.[1] These shields are mostly in the shape of a kite shield and are primarily colored yellow. They have a "T" shaped steel blue plating on the front surface, a steel blue-colored lower edge, and silver-colored sides. They also have grey spikes on their two upper corners. These shields are highly durable, capable of withstanding a direct Homing Attack without a scratch. 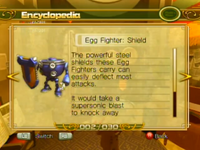 The Egg Fighter: Shield's profile in the Xbox 360/PlayStation 3 version of Sonic Unleashed.

An Egg Fighter: Shield in the Wii/PlayStation 2 version of Sonic Unleashed.