The Egg Emperor, from Sonic Heroes.

A flying battle mech armed with missiles, a heavy shield, and an energy-throwing mace.

The Egg Emperor (エッグエンペラー, Eggu Enperā?) is an object that appears in the Sonic the Hedgehog series. It is a mass-produced robotic mech created by Dr. Eggman. It was most famously used by Neo Metal Sonic to combat Teams Sonic, Dark, Rose, and Chaotix when they invaded the Eggman Fleet.

The Egg Emperor is a large and humanoid old gold-colored robot with a round torso. Its upper torso and back possess thick armor while its undercarriage is smaller and dark green. A white rim separates the Egg Emperor's upper and lower torso. It also has red and old gold bolts covering its underbelly, a dark green neck collar, and a round blue and purple window into its cockpit in the center of its torso. Its right shoulder is round with red and white spikes, and its right arm consists of a long old gold lance with a gray tip. Its left shoulder is more cup-shaped and its left arm has a gray hand with a dark green back. Strapped to its left forearm is a tall red shield with a circular gray and red center, a gray outline, and old gold edges. Its legs are also gray and thin while its ankles have old gold armor with red lower edges around them. Its feet are dark green with old gold (and later gray) soles, and its kneecaps have spikes. Its head also has sharp teeth and red spikes for a mustache. Lastly, it has dark green eyes, a fin on its forehead, and long rocket flaps on its back.

The Egg Emperor is one of Dr. Eggman's stronger mechs. In addition to being capable of flight, the Egg Emperor is equipped with a deadly lance for offense and a large shield for defense, which can withstand massive cannon fire without taking damage. It can also launch destructive energy waves by swinging its lance, and deploy missiles. It is also capable of high-speed flight, being able to dash incredible distances in a short time and almost keep up with even Sonic's running speed.

In Sonic Heroes, Neo Metal Sonic (while disguised as Dr. Eggman) used an Egg Emperor mech for each of his separate confrontations with Team Sonic, Team Dark, Team Rose and Team Chaotix onboard the Egg Fleet. In each encounter with the teams, however, the Egg Emperor got taken down by the heroes and blew up.

In the Nintendo 3DS version of Sonic Generations, the Egg Emperor was used by Dr. Eggman for a rematch with Sonic when the hedgehog entered the time frame of the Neo Metal Sonic incident. Despite taking Sonic by surprise with the Egg Emperor, the robotic mech was still destroyed by Sonic's hands.

In Shadow the Hedgehog, E-123 Omega mentions the Egg Emperor when facing the Egg Breaker in Iron Jungle, whom he notes bears a resemblance to the former.

In Sonic Rivals, the Egg Emperor appears on the 128th collectible card.

The final machine against the teams. It has 150 health

I'll show you what real evil is!

The Egg Emperor is the final boss of Team Sonic, Team Dark, Team Rose, and Team Chaotix's storylines in Sonic Heroes. Each team fights the Egg Emperor immediately after clearing their version of Final Fortress.

The stage where the battle takes place on consists of a series of two long platforms and a large circular platform, each separated by a huge gap which can be crossed via Jump Panels or Formation-specific gimmicks.

Primarily, the player must keep up with the Egg Emperor, who will move forward along the stage, attacking the player along the way. Various enemies will also spawn on the platforms (depending on which team is used). The weak spot of the Egg Emperor is the glowing hole on its chest. If the weak spot is attacked, it will put up its shield for defense, although it can be destroyed with enough attacks. It is important to not get too close to the Egg Emperor (especially if the player is launched into the air) as they may touch the Egg Emperor in mid-flight, take damage and most likely fall into the bottomless pit below. The Egg Emperor uses three different attacks:

In front of the player's starting position on the first platform are three Power Cores to collect. After the first platform, the player may switch to the Fly character to fly up to a Dash Ring to receive a yellow Power Core (alternatively, it can also be acquired if the player is in Power Formation and approaches the Jump Panel from as close to the center). At the end of the second platform, there is a Power Gong between two Jump Panels which may be used to receive a red Power Core.

Once on the large circular platform, the Egg Emperor will stay in the center and attack the player from there, although this leaves it vulnerable to the player's attacks. Here, spawning enemies and Egg Fleet cannons will also be present to distract the player.

After a while, the Egg Emperor will fly towards the next stretch of pathway. From there, the player can use the Pole to receive a blue Power Core. From then on, the level layout loops back to the beginning. These steps can be repeated until the fight is over. 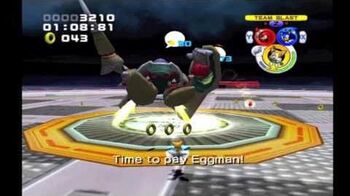 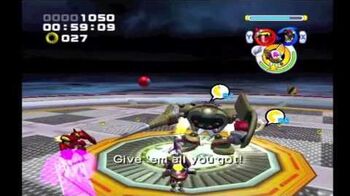 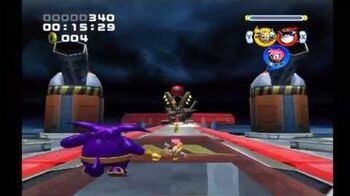 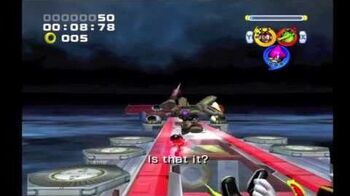 In the Sonic the Hedgehog comic series and its spin-offs published by IDW Publishing, the Egg Emperor is presented as one of the many mechs created by Eggman that Sonic has fought over the years. Its past is virtually identical to its game counterpart's, up until after the events of Sonic Forces.

"It's not over yet, troublesome fools!"
—"Eggman" upon reaching half-health, Sonic Heroes

"I won't go down that easy!"
—"Eggman" with less of his Health Gauge left, Sonic Heroes