Shadow facing the Egg Dealer in Cosmic Fall, from Shadow the Hedgehog.

A combat vehicle in the image of the doctor with slot machine reels.

I'll turn both of you into scrap with my latest and greatest creation!

The Egg Dealer is a vehicle that appears in the Sonic the Hedgehog series. It is a machine created by Dr. Eggman and used by the doctor during the Black Arms invasion.

The Egg Dealer's is bronze-colored in the top-half of its main body where as the bottom half of the main body has silver/grey and black with two hazard strips and a metallic silver and orange round underside. The front of the Egg Dealer highly resembles the face of its creator, bearing goggles-like eyes, a yellow nose and a brown moustache and in place of its "mouth", there are three red rectangular slot reel displays each with a yellow button at the bottom. It has four silver, red and bronze rigid legs each with yellow tips and a red wheel at the end.

The Egg Dealer possesses enough mobility to keep itself ahead of Shadow. Its main trait is its slot reels which can generate weapons for the Egg Dealer to attack with including explosives, rocket missiles, summon Egg Pawns and using unusual functions such as providing Shadow with Rings or Dark Gauge energy.

Ironically, the luck-based nature of the Egg Dealer and the availability of functions that even benefit its opponents as well as its user both allow the Egg Dealer to turn against itself, bringing forth its own destruction.

In Shadow the Hedgehog, after aiding the GUN counterattack on the Black Comet and penetrating the comet's defenses, Shadow and Knuckles find Eggman at the comet's heart trying to steal the Black Arms' Chaos Emerald. After destroying the Egg Dealer and taking the Emerald for himself, Shadow declares that he is a master of his own life and will live a neutral existence. He then finishes off Eggman with a knifehand strike.

In the Dark version of the boss fight, despite obeying the doctor's orders and sealing the shelter with lava, Shadow decides to fight Eggman for the Chaos Emeralds. After his defeat, Eggman asks why Shadow betrayed him and Shadow replies that being revealed as an android only fueled his semi-crazed patricide instead of serving Eggman. He vows to use the Emeralds to become even more powerful than the original Shadow, completely unaware that he is the original Shadow. He then finishes off Eggman with a knifehand strike.

In the Hero version of the boss fight, Shadow helps Omega obtain the Chaos Emerald in Dr. Eggman's lair, and confronts the doctor himself. Eggman finds himself in the midst of robotic retribution after his last humiliating defeat, as Shadow, believing himself to be an android, decides to use the Chaos Emeralds to take over the Eggman Empire and establish a whole rule of Androids. Just after Eggman reacts to his intentions in shock, Shadow and Omega kill their creator.

Eggman shows up on the ARK after Shadow grabs the last Chaos Emerald and exclaims that although his grandfather created Shadow, he should give him the Chaos Emeralds. After Shadow refuses, a confrontation between the two begins with Shadow winning. With all seven Emeralds in his possession, Shadow vows to use them to protect the ARK, and spares Eggman on the condition that he never returns.

Notably, this is the only ending where Shadow fights Eggman in the Egg Dealer and lets him live afterwards.

The Egg Dealer, from Shadow the Hedgehog.

The Egg Dealer is fought after completing the Hero mission of Black Comet, either mission of Lava Shelter, or the Dark mission of Cosmic Fall. The guides for each battle are, respectively, Knuckles, Omega, and Vector.

The Egg Dealer is fought on a square border platform and a small square platform in the middle with a Bottomless pit in between. The connections between the main platform and the middle square platform varies depending on the Stage: the Black Comet's version requires the player to use the Homing Attack on groups of Black Wings, Lava Shelter's version requires the player to use the floating red platforms, and Cosmic Fall's version simply has ramps between them. 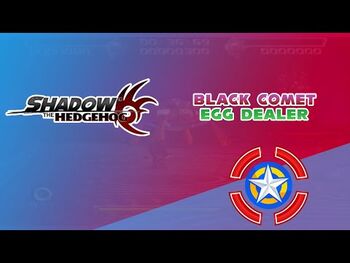 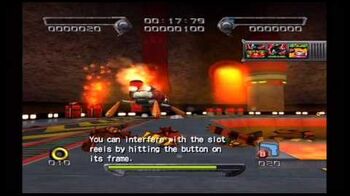 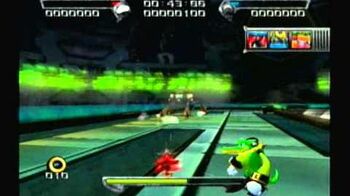