The Egg Cube[1] (エッグキューブ[2], Eggukyuubu?) is the boss of Toy Kingdom in Sonic Advance 3. It is controlled by Dr. Eggman.

The Egg Cube is much like a Jack-in-the-box toy. Its box has Eggman's insignia on it and it is mostly red with gray stripes. Gemerl's head is located on the "Jack's" nose. Egg Cube is mostly gray with a blue ball in his ear. It has a red and yellow party hat.

During this battle, Dr. Eggman will reveal himself from the side of the box in his cockpit, and will gradually inch to the left side of the arena if left alone. If he is allowed to reach the far left side, the box will sweep back and forth at high speed (potentially shoving the player off the edge) before settling back in the middle. Unlike other bosses, this boss is not defeated by hitting it enough times, but by forcing it off the right side of the arena by hitting it.

Each time the Egg Cube is pushed back, Eggman will deploy one of three attacks:

Also during the fight, Eggman will toss Guards onto the arena, which bounce once and then fall off the bottom of the screen. Unlike the sGuards in Toy Kingdom Acts 1-3, these ones will not shoot projectiles, but will complicate the player's efforts by crowding the arena. These badniks can be destroyed normally, but will not leave behind Rings. The more Eggman is forced further to the right, the more often he releases a the Guards to hinder the player.

The player cannot attack the boss when an attack is performed; they can only hit him when the cockpit appears, which is right after any of the previously mentioned attacks barring the Guards attack. Once the box drops down the right side of the arena, Eggman will haul himself and Gemerl out of pit, and the player will move on to Twinkle Snow. 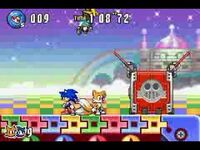