Egg Commanders are combat automatons constructed by Dr. Eggman, deployed throughout Soleanna during the events of Sonic the Hedgehog (2006).

"Egg Rounders rarely travel solo. Most are found in larger packs, and are often under the stewardship of the Egg Commander. Commanders are painted blue and red, which sets them apart from the all-white Egg Rounder. If the Commander is destroyed, all the Egg Rounders in the pack self-destruct. The Commander possesses the same shielding as the Rounders, so wait for the commanding mech to lower its plates before launching an attack."

It is an advanced model of the Egg Rounder, colored blue and red and easily spotted among the white Egg Rounders it leads. 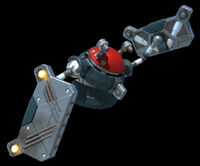