The Egg Buster is an enemy that appears in Sonic the Hedgehog (2006). It is an offensive mech created by Dr. Eggman and an advanced version of the Egg Flyers, developed for deployment around high-priority targets.[1]

The Egg Busters appear in a much lesser quantity than the Egg Flyer. However, they take two hits to be destroyed. They will also always be using their cloaking device.

In gameplay, they act much like the Egg Commander; destroying them self-destructs all robots under their commandeer. Once they spot the playable character, they quickly fire their three laser beams at them. After that, it takes a few seconds before they attack once again.

They usually remain stationary in the air while having the ability to rotate around their vertical axis in order to adapt to the position of the target should they be nearby. Only paralyzing them with Psycho Smash or Psycho Shock can disable their clocking device.

The Egg Busters are said to be aggressive.[1] They will attack the playable character if they get near.

The Egg Busters are capable of flight, and are equipped with a cloaking device that provides the Egg Busters with invisibility. They have an energy cannon similar to that of the Egg Lancer, and are also equipped with twin missile launchers that unleash volleys of slow-moving, but extremely destructive rockets.[1] 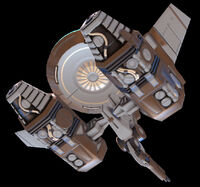