You may be looking for the Egg Shackle.

The innocent grins on these baddies belie a twisted personality that would allow them to self-destruct without batting an eye in order to take Sonic with them.

The Egg Burst[1] (エッグバースト[2], Eggu Bāsuto?) is an enemy that appears in Sonic Unleashed. They are a model of Badniks created by Dr. Eggman. These small robots appear out of nowhere. They specialize in attaching to their foes and then detonating themselves.

The Egg Bursts bear a strong resemblance to the Egg Shackles. They possess a spherical shape and are primarily colored red, with a black ring around their lower half. On their front is a black circle for a face, which has two yellow eyes and a curved felt of yellow lights resembling a smile. On their bottom, they have four black spikes reminiscent of legs, and they have five red spikes on their top.

The Egg Bursts only appear in the daytime Action Stages/Stages of Sonic Unleashed. In the Xbox 360/PlayStation 3 version, the Egg Bursts can attach themselves to Sonic whenever he makes physical contact with them when not attacking, and if they stay on him for too long, they will self-destruct and cause damage to the player in the process. To get the Egg Bursts off before they detonate, the player has to repeatedly use the Stomp, Sonic Boost or Foot Sweep.

In the Wii/PlayStation 2 version, the Egg Bursts appear in the Stages as small bombs that will rain down on the path from above and explode upon impacting the ground, although their explosions do not have a wide range.

The Egg Bursts are described as having twisted, suicidal personalities despite their innocent look, being perfectly willing to destroy themselves in order to harm others.

The Egg Bursts have the ability to self-destruct, creating a small, but intense explosions powerful enough to injure Sonic, though at the cost of their own destruction. 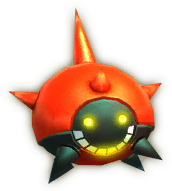 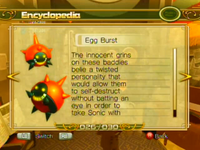 The Egg Burst's profile in the Xbox 360/PlayStation 3 version of Sonic Unleashed.