The Egg Bubble, from Sonic the Hedgehog CD.

Sonic chases Dr. Eggman through the ancient ruins, eventually cornering him in a flooded chamber. Sonic has to inhale his way through the Egg Bubble's shielding bubbles to get to the center.

The Egg Bubble[1] is a vehicle that appers in the Sonic the Hedgehog series. It is a modified Egg Mobile built by Dr. Robotnik, who used it during the Little Planet incident.

The Egg Bubble is a regular Egg Mobile. Oval in shape, it possesses its usual windshield, its blue seat, and its Dr. Robotnik symbol on its front part. It also has three thrusters on its bottom part.

The Egg Bubble is very fast, allowing it to move through a maze with ease. Its thrusters can also fire projectiles. In addition, while underwater, the vehicle can surround itself with a lot of Air Bubbles, creating a shield.

In Sonic the Hedgehog CD, Dr. Robotnik was wandering around Tidal Tempest until he was attacked by Sonic the Hedgehog. In an effort to destroy his enemy, the doctor dove under water in the Egg Bubble, and surrounded himself with a shield of Air Bubbles. He tried to destroy Sonic underwater, but the hedgehog used the Air Bubbles to his own advantage and destroyed the vehicle.

Sonic facing the Egg Bubble, from Sonic the Hedgehog CD.

A modified Egg Mobile surrounded by multiple Air Bubbles. Needs to be hit once to defeat.

The Egg Bubble is the boss of Tidal Tempest in Sonic the Hedgehog CD, and the third boss overall in the game. While in the original version it is only faced by Sonic, the 2011 remaster makes it possible to face it with Tails.

In Tidal Tempest Zone 3, shortly after the start, the player will find Dr. Robotnik onboard an Egg Mobile-like vehicle that hovers above a vertical corridor. When the playable character gets close however, Robotnik moves down the corridor while the passage behind the playable character closes. From here, the player's objective is to chase the vehicle-riding Robotnik through the corridors and deal damage to him when possible. For this portion of the boss fight, Robotnik has no armor and has no attacks or defenses to protect himself with other than his fleeing maneuvers. After each hit, Robotnik will speed up and rush away from the playable character, but he will return to his normal speed after a while. In addition, the corridors Robotnik travels through are connected in such a way that they loop around. Regardless, the player must chase Robotnik until he is hit four times. After that, Robotnik's vehicle will start to explode and he runs away while the passages blocking the exit will unlock. By proceeding through that exit, the player will be able to enter the main boss arena, with only a single Super Ring monitor appearing along the way.

The boss arena itself is a flat area that is completely submerged. When the player enters it, the Egg Bubble is waiting for them. It is also high enough to be out of the the playable character's jumping reach.

The boss fight begins when the Egg Bubble creates a shield of sixteen Air Bubbles around itself. It will then move around while preparing to fire four energy projectiles. The Egg Bubble will alternate its flight pattern from one side to the other, during which it fires its previously prepared projectiles. While flying around, it follows two specific movement patterns: a diving arc towards the ground or a horizontal movement from one side to the other, high above the playable character.

The Air Bubbles surrounding the Egg Bubble are both a help and a hindrance to the player. By inhaling Air Bubbles, the player replenishes their oxygen supply and weakens the Egg Bubble's protection. Upon inhaling an Air Bubble, however, it will cancel the player's Spin Jump and knock the player away, thus putting the playable character at risk of taking damage. Also, after completing its flyby or overhead flight pattern, the Egg Bubble will rearrange its Air Bubble cover so that the Air Bubbles are always equally dispensed around it, thus eliminating any hole in this defense. 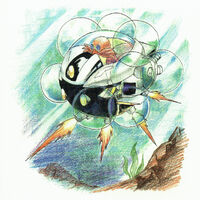