The Egg Breaker in Iron Jungle, from Shadow the Hedgehog.

That Robot reminds me of the Egg Emperor.

The Egg Breaker (エッグブレーカー, Egguburēkā?) is a machine in the Sonic the Hedgehog series. It is a battle mech built and used by Dr. Eggman. It can be encountered in Cryptic Castle, Mad Matrix, or Iron Jungle. In each level, it has an extra ability.

The Egg Breaker is a mech with an open cockpit that Dr. Eggman sits in. It somewhat resembles the Egg Emperor from Sonic Heroes, except it bears a red and blue paint scheme instead of gold, and its right hand is a giant spiked ball that it can throw, which is used to try to crush Shadow and create shock-waves. On average it takes 23 shots from a normal gun to defeat.

The Egg Breaker can jump to create a shock-waves. It can spin around with its spike ball and throw it, with fire balls circling around it. It can quickly generate new spike balls easily. The Egg Breaker can also fire lasers, especially with its eyes, and has the ability to leap considerable distances. It can fire a horizontal array of bombs as well.

The Egg Breaker, from Shadow the Hedgehog.

Egg Breaker appears as a boss in Shadow the Hedgehog, being fought after all missions in Cryptic Castle, Mad Matrix, and Iron Jungle. The guide for these battle are, respectively, Amy, Espio, and Omega.

The battle takes place on a circular platform. There is a trail of rings around the platform and ghosts sit at the very edge. During this battle, Eggman will attempt to smash the player shouting "Lights out!" as his main attack. If the player gets too far away from him, he will fire his spiked ball at them. The Egg Breaker's third attack is the deadliest. It will spin around and around as it swings its spiked ball, making it invulnerable to all attacks.

The battle takes place inside a cylinder shaped room with a trail of Rings going around it. There are floating cubes above that have Egg Pawns and jars of Rings on them. The only way to get up there is by using an ascending bar of light. Eggman attacks similar to the way he did at Cryptic Castle. But this time, he'll spin and send out bombs with his face on them while shouting "You know what they say, the more the merrier!". This fight is also harder because of the Egg Pawns helping the Egg Breaker being armed with Egg Bazookas, ensuring Shadow takes damage from being caught in the explosions of the rockets.

The battle takes place inside Eggman's base; another circular room. There is a platform in the center. Near the outside of the circle, there are two turrets and two rockets. This Egg Breaker battle is vastly different from the previous two. Eggman doesn't engage in hand-to-hand combat with the player as he did before. Instead, he sits on the center platform and fires lasers from the Egg Breaker's eyes. The easiest way to defeat it is by using the turrets. However, the Egg Breaker's lasers will eventually destroy the turrets, leaving only the machine guns behind. Another method of attack is using the rockets to get to the Egg Breaker's level. After it gets down to half HP, the Egg Breaker will jump off the platform. It will still fire lasers rather than attacking directly, unless the player gets too close. Despite all of this, it is considered to be the easiest of the Egg Breaker battles because of the absences of the close range attacks it uses with its spiked ball. 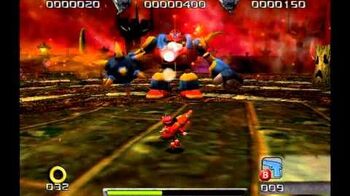 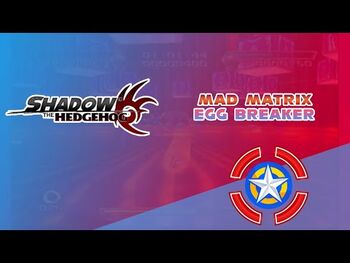 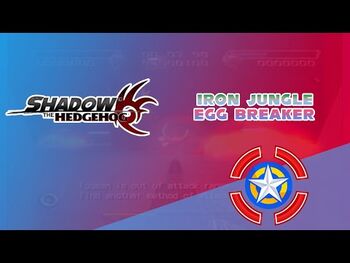 In the Sonic the Hedgehog comic series and its spin-offs published by IDW Publishing, the Egg Breaker forms a part of Dr. Eggman's Badnik army. Unlike its game counterpart, this incarnation of the Egg Breaker serves as an independent Super Badnik, and not a mech vehicle. Like in Cryptic Castle, this Egg Breaker model is also equipped with a mace for an arm.