Not to be confused with Eggbot.

The Egg Bot, from Sonic Chronicles: The Dark Brotherhood.

The Egg Bot (エッグボット, Eggu Botto?) is a character that appears in Sonic Chronicles: The Dark Brotherhood. It was a robot duplicate created by and fashioned after Dr. Eggman in the doctor's image, making it a prime example of Eggman's narcissism.

The Egg Bot was created by Dr. Eggman to serve as another member of his machine army, but was later deemed faulty. As such, the Egg Bot was left in the Hazard Vault of Metropolis with his other failed creations.

In Sonic Chronicles: The Dark Brotherhood, when Angel Island's Master Emerald was taken from its resting place, the island fell from the sky and crashed on top of Metropolis, taking out the city's power grid and breaking open the Hazard Vault, allowing the robots within to run loose. The Egg Bot, however, remained inside the Hazard Vault with a few other robots.

When Sonic, Shade and their team arrived to reclaim the Dimensional Buffer for the Blue Cyclone, the Egg Bot revealed itself to the group announced that it was free to destroy and battled the four of them with its Assault Drone Mk. IIs backing it up. Despite its attempts though, the Egg Bot was defeated, which upset Eggman who thought it was a "handsome devil."

The Egg Bot acts out like a lunatic, laughing like its creator and thinking itself as the most beautiful, genius and utmost perfect creation that cannot be defeated. It also has a deep "disgust" for Sonic, or at least hedgehogs in running shoes.

The Egg Bot can fire bullets from the buttons on its chest as its main attack and has a POW move called Shocker (ショックビーム, Shokkubīmu?, lit. "Shock Beam") where it shoots beams of electricity from its hands. It can also repair itself so long as it is provided with back-up. 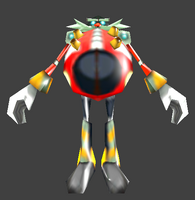