The Egg Beetle, from the Xbox 360/PlayStation 3 version of Sonic Unleashed.

As one of the giant robots Eggman created to stop Sonic, the behemoth beetle equipped with massive pincers, incendiary rounds, guided missiles, and more.

The Egg Beetle (エッグ・ビートル, Eggu Bītoru?) is an object that appears in the Sonic the Hedgehog series. It is a large stag beetle-based mech with powerful mandibles created by Dr. Eggman. He used it to seek out a Gaia Temple during the Dark Gaia incident, though it was destroyed by Sonic.

The Egg Beetle resembles a stag beetle. It is made of purple-coated metal, it has a round cephalothorax which the Egg Mobile can fit into, a large abdomen with a grey, yellow and green missile launcher on top and a landmine-deployer on the bottom, six green-tipped legs with rockets on them, and a pair of large and flexible pincers which emit flaming orange energy.

Thanks to its rocket engines, the Egg Beetle is capable of flight. It can fly at incredible speeds, but cannot stack up to Sonic the Hedgehog's speed. Its primary weapons are its massive pinchers which can tear through their foes with a fierce, energy-infused grip. It can as well charge its pinchers with energy for greater power to turn the Egg Beetle into a deadly projectile by aligning in an arrow shape. It is also loaded with a number of armaments, incendiary rounds, guided missiles, self-adjusting landmines and more.[1] The Egg Beetle can also operate independently without the Egg Mobile controlling it, suggesting it either possesses an A.I. or can be controlled remotely.

In the Xbox 360/PlayStation 3 version of Sonic Unleashed, the Egg Beetle was specifically created by Dr. Eggman to stop Sonic the Hedgehog.[1] When seeking the Gaia Temple near Mazuri, the doctor brought the Egg Beetle along. It was soon after put to the test when Sonic and Chip caught up with Eggman, who engaged Sonic with the Egg Beetle. Nonetheless, the mech got trashed by Sonic. Later, Eggman would combine the Egg Beetle and Egg Devil Ray's design to make a more successful weapon against Sonic when both mechs proved incapable of stopping him.[2]

Sonic fighting the Egg Beetle, from the Wii/PlayStation 2 version of Sonic Unleashed.

An arachnid-like stag beetle robot that is the boss of Mazuri, armed with various firearms and can tear things to shreds with its claw.

The Egg Beetle is the first daytime boss in the Wii/PlayStation 2 version of Sonic Unleashed, and the game's overall first boss. It is be fought with Sonic the Hedgehog after going to Mazuri for a second time. The boss battle takes place on an looping road on top of a large baobab trees.

He attacks by releasing explosive boxes that roll over once, sometimes moving directly into Sonic's path. When he uses his bite attack, he takes down his shield. Boost into the cockpit or Homing Attack it to damage it. It is recommended to boost while in 3D because he will go flying. If the player has enough boosts, the player can hit him up to 3 times. If the player uses a homing attack, he will not go flying so the player can't combo him, but he still take damage. When he shifts to a 2D perspective, it'll shoot three missiles. The player must watch the order in which the missile engines ignite and then jump at the right time to avoid being hit. Then the Egg Beetle will try to crush the player once with flaming claws then it will get ready for another when he is in front of the player. If it is near defeat, it bites twice instead of once. The player must hit it with a Homing Attack when his shield is down. If the player boosts, the player, not the Egg Beetle, takes damage and must go through this whole cycle again. Once you hit him with a homing attack, you will go back into the 3D section. Do the same strategy as before to finish him.

The time needed to "S" Rank is 2:20. Failure to make that time will yield a "C" Rank. Therefore, no Sun Medal will be awarded. 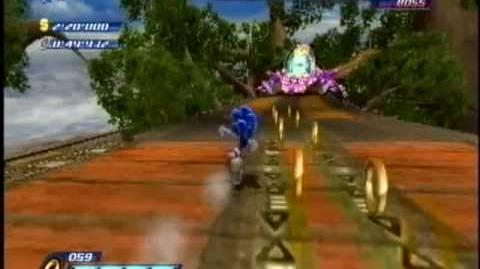 Sonic fighting the Egg Beetle, from the Xbox 360/PlayStation 3 version of Sonic Unleashed.

An arachnid-like stag beetle robot that is the boss of Mazuri, armed with various firearms and can tear things to shreds with its claw.

The Egg Beetle is the second daytime boss in the Xbox 360/PlayStation 3 version of Sonic Unleashed, and the game's overall second boss. It is fought with Sonic the Hedgehog directly after clearing the daytime version of Savannah Citadel Act 1. The boss battle takes place on an looping road on top of a large baobab trees.

It starts by firing missiles and mines which can be avoided with Quick Step. Sonic must Boost his way until he gets close enough for the Egg Beetle to snap its flame claws in attempt to crush Sonic in between. The player must boost again to smack the beetle backward and if the player's Ring Energy is filled enough, he can ram into the Egg Beetle for a total of 3 hits before it gets back in position. However, he can use the Homing Attack instead, which will send the Egg Beetle recoiling ahead after a successful hit. If the player has enough Ring Energy, he can almost continuously boost through the stage. If the player takes a while to do this though, the Egg Beetle will charge straight at the player in which the player can avoid with Quick Step. The screen will then shift to a 2D perspective and it will use the same attacks, but the player will have less room to dodge.

An easy tactic to end the battle quickly is by filling the Boost Gauge and use the Sonic Boost to get closer to the Egg Beetle. Doing so should make it open up its claws then and expose its weak spot to the player even after dealing three consecutive hits to it before. 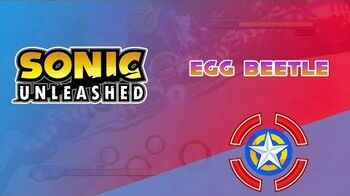 In the Sonic the Hedgehog comic series and its spin-offs published by Archie Comics, the Egg Beetle is a mech belong to Dr. Eggman, but was borrowed by the Efrika Egg Army. 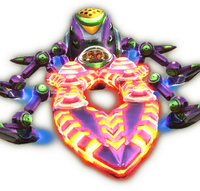 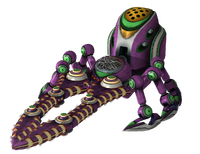