The Egg Balloon, from Shadow the Hedgehog.

Shadow, I'll board my airship and take out the GUN troops as I go. Cover me!

The Egg Balloon[1] is a vehicle that appears in the Sonic the Hedgehog series. It is an airship that was used by Dr. Eggman during the Black Arms' invasion.

The Egg Balloon resembles a blimp made entirely of metal. It has a red envelop with black frames, sharp stabilizers and the Eggman Empire's decal on the sides. Hanging below the envelop is a wide and solid gondola with turrets on the side and a propeller on the rear.

The Egg Balloon is heavily armored and can as such withstand powerful projectile attacks for extended periods of time. It is also equipped with six turrets which fires shots powerful enough to create explosions.

After the Eggman Fleet had been dealt heavy damage by the Black Arms, Dr. Eggman decided to fall back to his base in his Egg Balloon to formulate a new strategy. However, the doctor found himself pursued by GUN forces, which were not wasting an opportunity to attack the Eggman Empire while Eggman was already weakened. The vanguard of the GUN forces was accompanied by E-123 Omega, likewise determined to kick Eggman while he was down. Eggman attempted to flee from the Iron Jungle in his Egg Balloon.

In gameplay, the Egg balloon only appears in Iron Jungle, where it will fly through the Stage. In the Hero Mission for this Stage, the player's objective is to destroy the Egg Balloon. 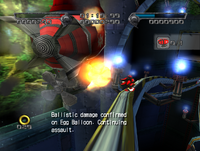 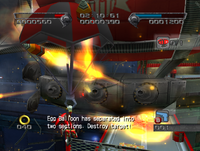