The Egg Albatross, from Sonic Heroes.

The Egg Albatross (エッグアルバトロス, Egguarubatorosu?) is a vehicle that appears in the Sonic the Hedgehog series. It is a large, blimp-like battleship. It is controlled by Neo Metal Sonic, who is disguised as Dr. Eggman.

The Egg Albatross has three main sections: a lower platform containing Egg Pawns, cannons and a Iron ball launcher; a gold and red blimp with several of the aforementioned Iron ball launchers on either side and two propellers, one on the front and back, respectively; and lastly, the Egg Hawk sitting on top.

Team Sonic against the Egg Albatross, from Sonic Heroes.

The Egg Albatross is the fourth boss for all the teams in Sonic Heroes, with the battle being the same for each.

This boss has three phases: the first phase deals with the undercarriage of the ship, which contains Egg Pawn gunners, a front cannon which shoots the same projectiles as Rhinoliners, and four blasters that emit projectiles like those of Cameron's and their golden counterparts. After reducing one of the wings of the undercarriage from 40 HP to 0 HP, the undercarriage falls off into the canyon floor. The ship then becomes a blimp, just barely floating above the ground, with many spike cannons on each side and 50HP. The rotor is the only safe place to attack it in this form. Once the rotor has been destroyed, Eggman breaks off the Egg Hawk from the balloon and will begin to flee. The Egg Hawk in this fight is much weaker than in its first appearance (having only 15 HP as opposed to the first having 99 HP), so defeating it isn't too difficult. 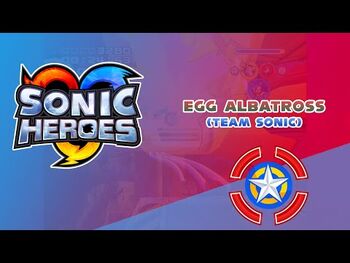 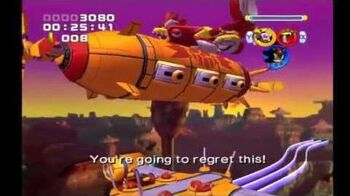 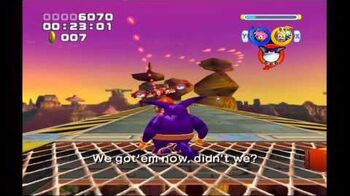 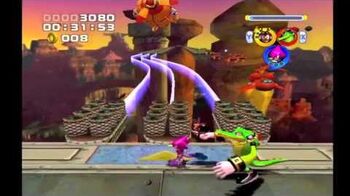 In the Sonic the Hedgehog comic series and its spinoffs published by Archie Comics, the Egg Albatross appeared and, at some point, was sold to Breezie the Hedgehog, who had it hung from a ceiling in Casino Park for display purposes.