The large floating robot with four arms, searchlights and ability to summon enemies. The robot fires missiles and core lasers.

— Dr. Eggman, during the fight with Sonic.

The Egg Genesis is a titanic battle station that carries multiple mech battalions in its four massive arms. The metal monstrosity is loaded with multiple offensive weapons, including missile launchers on each arm and a homing laser that erupts from its under- carriage, the Egg Genesis' weak spot.

In Soleanna Forest, as Eggman realizes Elise is standing on the edge of the Egg Mobile, he tells Elise that there is no escape for her. The princess then declares she would rather die then be the doctor's prisoner, and proceeds to boldly jump off of the Egg Mobile. Fortunately, Sonic arrives just in time to catch her. Eggman growls and sends the Egg-Genesis to attack.

After beating White Acropolis, Silver fights the Egg-Genesis. Silver has to throw boxes and missiles at its core in order to destroy it.

At the beginning of the battle, the Egg Genesis rises into the air, closing its arms. When the player sees the arms lock into a vertical position, the Egg Genesis will. The missiles are slow enough for the player to outrun them, but with four individual volleys in play, the player must avoid running away from one salvo and into another. While running from the missiles, the player should pick up Rings.

There are two ways to beat this boss.

Once the Egg Genesis' health is fully depleted, it will makes one last desperate move. Knowing it is going to explode, the machine targets Sonic one last time and attempts to crash-land onto him. If the player is caught beneath the titanic battle fortress they will be crushed, so they must constantly move away from the falling fortress until it finally lands upon which the boss fight will end.

Similarly to Sonic's fight, when the Egg Genesis closes its four arms and rises off the ground, it will be preparing to release a missile volley. The energy core is protected in this position. However, as the player cause damage to the Egg Genesis, the arms will fall away one by one. Not only does this expose the core, but it decreases the number of missiles the monster can ﬁre at the player. The heat-seeking missiles move slowly through the air, and the player can use metal crates to deﬂect the missiles, or grab them with Silver's Psychokinesis and send them flying back at the boss. After ﬁring several missile volleys, the Egg Genesis will resort to using its Laser Attack if the player gets caught in its spotlights. The machine will rise into the air and spread its arms to expose its core completely. A red sphere will then appear around the player, indicating that the Egg Genesis has locked on to their position. As in Sonic's version of the fight above, the player must run in order to evade the laser beam the boss will fire. The Egg Genesis shoots a single beam early in the battle, and if the player stays in constant motion, the player can escape the lock just as the beam ﬁres. Attacks to the core will cause the most damage, but it is possible to damage the boss just by hitting it with crates. Every quarter of its health bar that the player chisels away destroys one arm. When the Egg Genesis has only one arm, it will become desperate in its attacks. When it locks onto the player with its laser attack, the player must keep running even after they see the ﬁrst beam in order to evade all of the blasts.

Omega fights the Egg Genesis in White Acropolis. He must use his Homing Missiles to attack the Egg-Genesis and the robots it sends out. 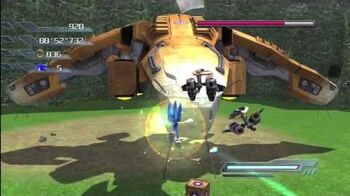 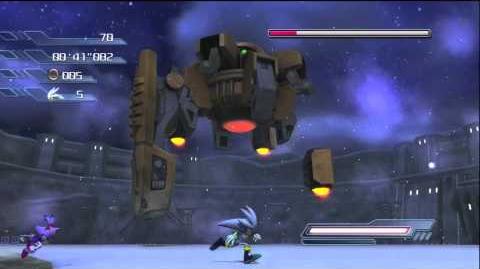