Echo the Dolphin is a character that appears in the Sonic the Hedgehog comic series and its spin-offs published by Archie Comics. She is a mobian dolphin[2] and a lieutenant in the Meropis City Guard.[3]

Echo is a humanoid dolphin of average height. She has purple skin and a white muzzle with a rounded snout, along with some purple dots on her cheeks which resemble freckles. She has a dorsal fin on the top of her head, two on the back of her head, and one more on her back, as well as a caudal fin for a tail.

As attire, she wears the standard Meropis City Guard uniform, which includes a black shirt and shorts, green additional garments and a golden helmet adorned with shells. Uniquely, she also wears a shell bracelet around her right ankle.

When Echo and the Meropis City Guard came to their usual morning visit to the Eusebes Temple during the Shattered World Crisis, they found the Knothole Freedom Fighters–Sonic the Hedgehog, Amy Rose, and Rotor the Walrus–trespassing on their sacred grounds.[4] Once it was decided that most of the Freedom Fighters, Coral the Betta and Razor the Shark would be taken to their king and queen, Echo was ordered to stay at the temple to keep an eye on Rotor and Pearly the Manta Ray, which she did accordingly. Later the same night, when the shield protecting Meropis disappeared, Echo and the Meropis City Guard were forced to protect the city and evacuate the citizens when it was invaded by Dark Gaia Creatures.[5] Although they initially found themselves overwhelmed, things turned around when Chaos showed up to assist in fighting the monsters off. Echo was then sent by Captain Striker the Mantis Shrimp along with a few other guards to protect the temple while Coral worked on restoring the shield with Pearly and Tikal's help, which was ultimately a success.[3]

Sometime later, when Princess Undina went missing during her studies in Spagonia, a ransom was sent demanding money for Undina's return. When no one appeared to retrieve the ransom, Echo was assigned by the King and Queen to search for Undina. Her first action was to interrogate Professor Dillon Pickle at Spagonia University on Undina's whereabouts, who mentioned to her that Undina had departed to Empire City. There, Echo discovered Undina had briefly partnered with Honey the Cat to advertise Honey's fashion line. Echo learned from Honey that Undina had decided to embark on a world tour. After receiving information from an anonymous source, Echo learned that the princess was last spotted somewhere in Westopolis and the ransom demand came from pirates. However, Echo's lack of familiarity with the city led her to requesting the Chaotix Detective Agency to assist her in finding information at the docks.[6]

With some help from Vector the Crocodile, a dock worker named Daryl admitted that he saw Undina with the Pirates heading toward an island called "The Knives". Echo and the Chaotix decide to head to the island with Echo's submarine-convertible car. During the trip however, they run into an unknown construct. Supplying the Chaotix with Air Charms, the group checked outside and were ambushed by Razor the Shark and his chao Crusher. Espio ceased the hostility between the two parties, and Razor revealed that he was also trying to find Undina and the pirates on Coral's behalf. Echo then noticed how odd it was that they ran into Razor where the pirates were, and questioned how Razor also knew about the pirates' involvement. Before she could confirm her suspicions, the pirates' nearby ship caught the group in a cage. The group was then dumped onboard the ship, and the group found themselves confronted by the Pirates of the Setting Dawn, Undina among them.[6]

Echo was initially fully prepared to fight them off, but was left confused by Undina's seeming lack of concern for the situation. She was then caught off guard by both Razor, who held her at knifepoint and claimed he had come back to rejoin the pirates, and the Chaotix, who had seemingly agreed to join them as well. The betrayal left Echo shocked and dismayed, to the point that she offered little resistance when she was taken to the brig on Undina's suggestion to ransom her.[7] However, she was eventually visited by Espio the Chameleon, who explained to her that their apparent betrayal was just a ploy and they were still fully on her side, as well as how Undina was assisting the pirates in locating some kind of treasure and Vector believed that would be their best chance to make a move. After being informed of their plan of action and having her cell unlocked, she covertly made her way to their location.[8]

Taking advantage of the pirates' disappointment at the lack of anything valuable to steal, the Chaotix, Echo and Razor attacked them and escaped, taking Undina with them. While they were able to make it to the Setting Dawn before their pursuers, the group was surprised to find that the ship was password-protected. Echo's panic was short-lived, however, as Undina revealed she knew what the ship's password was. After their escape, Echo found out that Undina's suggestion to ransom her was all a ruse to keep the pirates from harming her, and was shocked when the princess made it clear that she would not be returning to Meropis, preferring instead to keep travelling around the world. Echo was initially against the idea, but was quickly convinced to remain on board as Undina's bodyguard, and she bid the others farewell alongside her.[9]

Echo is very dutiful and dedicated, though maybe to the point of being slightly uptight. She also takes her job very seriously as she followed and upheld Captain Striker's orders without question.[5] She seems to also consider Striker's views on others, as she questioned if Razor's activities supposedly validated Striker's suspicions on him. However, she does not do too well out of her element, and has trouble understanding surface customs.[6]

When on her own assignment, Echo maintains her commitment, although her focus on her objective leads her to extreme lengths to complete it, no matter the payment. She is quite determined and considerate of every detail in her work, looking into all the information she could find and preparing for the scenarios she came across. Her sense of duty can lead to moments of worry and uncertainty however, and she can feel strong concern for the safety of the royal family.[6]

As an aquatic mobian, Echo is capable of aquatic respiration, allowing her to breathe both on land and underwater.[5]

Echo carries a bident, which is the standard weapon for the Meropis City Guard. In addition to its usage in melee combat, this weapon can shoot out a thin laser from its points.

Captain Striker is Echo's captain from the Meropis City Guard. Echo follows and keeps his orders without question. She also takes Striker's opinions about others very seriously, as she questioned whether Razor's unclear activities supposedly validated Striker's suspicions about him.

Initially, Echo did not trust Razor the Shark, much like her captain. Her skepticism is further increased when she and the Chaotix ran into him during their search for Princess Undina, as both she and Vector noticed that his knowledge of the exact place he should be at and that pirates were involved was too suspicious for it for be a mere coincidence or a lucky guess. His apparent betrayal only soured her view of him even more, expressing outrage at his perceived willingness to betray Coral the Betta's trust and referring to him as a scoundrel in the middle of a furious tirade. However, it can be presumed that things improve between the two once Echo recognizes that Razor is fully on her side and wholly committed to rescuing Undina for Coral's sake, especially once their mission is complete and they manage to escape safely.

Echo is very loyal to Princess Undina. She is presented as being very concerned about the princess' safety, and it is implied that the king and queen sent her to look for Undina because she sincerely cares about her. Her loyalty is so great that, when Undina asked if she would join the Pirates of the Setting Dawn upon being ordered to do so, she would have done it despite it being against her principles. Undina seems to be fond of Echo as well, expressing sympathy at her rescuers' perceived betrayal of the lieutenant even in the middle of her ditzy charade and taking action to ensure the pirates wouldn't harm her. After escaping from the pirates with Razor and the Chaotix, Echo agreed to be Undina's bodyguard for the remainder of her travels. 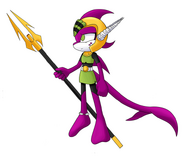 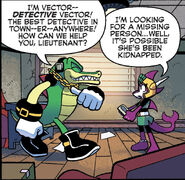 Echo right outside of Honey Clothing's building, from Sonic Universe #91.
Add a photo to this gallery

Retrieved from "https://sonic.fandom.com/wiki/Echo_the_Dolphin?oldid=2193167"
Community content is available under CC-BY-SA unless otherwise noted.