Sonic the Hedgehog CD (Only appearance)

The Egg Mobile on a bipedal mech containing two Bobbins.

The EGG-HVC-001 is the first boss encountered in Sonic the Hedgehog CD in Palmtree Panic, piloted by Dr. Robotnik.

The machine is Robotnik's Egg Mobile attached to a bipedal mech that contains two bouncy Bobbins on the arms, along with spikes on its feet.

Robotnik will walk back and forth across the arena (although not to the end of the screen to the player's safety), occasionally stopping to charge an attack by moving the arms backwards, and thrusting them forward. This is the best opportunity to attack.

Interestingly, the mech can be easily defeated in a mere few seconds by simply running to the end of the screen, waiting until the mech drops in, and attacking from behind.[1] 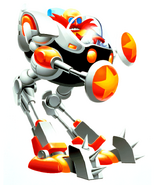