"The Adventures of Knuckles and Hawk"
(only appearance)

None (referred to as female)

After hearing from Decoe and Bocoe that Knuckles' friend Hawk had found the fifth Chaos Emerald, Dr. Eggman deployed E-91 Lady Ninja to steal it from them. She disguised herself as a rickshaw driver in Oriental City and took Knuckles and Hawk to an abandoned subway where the gem was hidden. Lady Ninja soon discovered she was not the only one stalking the pair, as Rouge the Bat tried to follow the two treasure hunters underground, but was quickly knocked unconscious by Lady Ninja. Lady Ninja than proceeded to restrain Hawk as Eggman distracted Knuckles with a hologram of himself. Removing her disguise and going straight for the Chaos Emerald, Lady Ninja pulled it from Hawk's hands using her chain weapon and it came flying towards her. Knuckles took this opportunity to kick a bucket into her face and Lady Ninja retaliated by activating growing a wrecking ball on her chain weapon. She proceeded to attack Knuckles and Hawk but missed both of them, creating severe structural damage and causing the subway to collapse with the Chaos Emerald trapped under the rubble. When Knuckles and Hawk returned later to salvage the jewel, Lady Ninja kidnapped Hawk and held him for ransom, demanding Knuckles meet her in Orient New Town for the exchange.[2]

That night atop a building under construction, Knuckles met with Lady Ninja as Hawk was suspended from a crane. Knuckles tossed the Chaos Emerald to her in a bag, only for Rouge to knock it into the streets below. Lady Ninja used her kite technique to glide after the bat girl. Rouge used a flare gun to set her kite ablaze, but Lady Ninja used a shuriken to cut the bag open and cause the Chaos Emerald to land in the market below. Using her flying squirrel technique, she now had to chase after Knuckles and Hawk who had recaptured the gem. She managed to corner Hawk in a dead-ended alley and take the Chaos Emerald from him and then took on Knuckles in hand-to-hand combat. She managed to subdue him in her electric net, but Hawk threw a bucket of water over her, causing her to short circuit, and Knuckles delivered a punch so powerful it sent her flying into the sky.[2]

E-91 Lady Ninja has many skills such as imitating shadows and knocking characters out without touching them. Despite her thin appearance, she is also strong enough to swing around a weight at sixteen tons. She also had an entire arsenal of different techniques similar to ninjutsu.[1]

A robot based on a female ninja, E-91 was equipped with shurikens, gliders, an electrocution net, a chain with a weight at the end that could either be small or turn into a wrecking ball. 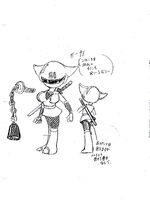