E-90 Super Sweeper is a character that appears in the anime series Sonic X. It was a giant E-Series robot created by Dr. Eggman for high-altitude operations.

Super Sweeper was giant green spacecraft-like robot. It had a large head up front resembling that of a bird's while its body was akin to that of a cargo section. On its rear it had a set of wings on the side, along with a rear wing on top, and two red rocket thrusters. Connecting its head and body was a yellow "neck" with red rims. Super Sweeper's head also had wings on its jaw, a tall yellow fin on its forehead, blue eyes, and red on the tip of its "beak".

Soon after his latest failure Dr. Eggman deployed E-90 into the stratosphere and have it steal dozens of the world's satellites. This move allowed Dr. Eggman to remove spy satellites watching him, gain the ability to broadcast his own television show to the masses and give himself a new supply of technology to convert into robot parts. However, Sonic the Hedgehog and Tails soon after leaped into action in the Tornado 2 and headed for the stratosphere. E-90 retaliated as soon Dr. Eggman saw the heroic duo approaching, firing lasers at the Tornado 2 and attempting to catch the biplane in its "jaws" when they evaded its initial assault. E-90 pressed on, firing another round of laser fire and deploying explosives into the air behind it in an attempt to down the aircraft, but Tails evaded it all. Tails then retaliated with some cunning flying and tricked E-90 into performing an aileron roll, allowing Tails to fire off a burst of machine gun fire on E-90's lasers, disabling them. Tails repeated the attack on the face of E-90, but the robot's armor was too strong. E-90 then changed course and got the unsuspecting Tails and Sonic to chase it before delivering a surprise attack with its removable midsection. Barely evading the attack, Tails and Sonic ducked into cloud cover and upon emerging were face to face with E-90. Dr. Eggman had E-90 fire a barrage of missiles at the duo, only for Tails and Sonic to dodge the missiles and throw them off course by jumping on them respectively. One well aimed kick by Sonic sent a missile directly into the face of E-90 and under the cover of the smoke Dr. Eggman activated E-90's Super Sweeper. The plane was very nearly sucked into the machine's powerful vacuum but managed to pull away. With the midsection of E-90 gone though, the robot could fly faster than the Tornado 2. With E-90 gaining on them and threatening to suck them both into its maw, Tails and Sonic flew behind cloud cover, only for E-90 to start sucking in the clouds themselves. Under the stress of trying to outrun E-90, the engine of the Tornado 2 gave out and Tails and Sonic proceeded to fall into a nose dive. The battle won for now, E-90 returned to Dr. Eggman's base and was fully repaired.[1]

Soon after E-90 was launched into the stratosphere again, The military laid a trap for E-90 by arming satellites with laser weapons. Once E-90 was in range they opened fire, only to find the robot was equipped with a force field that blocked all their laser attacks. E-90 then proceeded to swallow all of the attacking satellites. As this was happening, Tails, Sonic and Chris arrived in the X Tornado. Dr. Eggman took the controls and began the battle with a round of missiles, only for the X-Tornado to evade its assault and for Sonic to use the projectiles as stepping stones to land on E-90. The robot attempted to repel Sonic with laser attacks, only for Sonic to evade them and for the guns of the X-Tornado to destroy the lasers. Dr. Eggman then utilized the lasers of one of the captured military satellites to attack the new aircraft and keep Tails and Chris at a distance. This plan was short-lived, however, as Sonic destroyed the satellite and the battle continued. The X-Tornado soon gained on and overtook E-90, allowing Sonic to board it again, but the wind pressure pulled him off the hull of the robot and forced him to hang on. Meanwhile, E-90 took the opportunity to fire another barrage of missiles at the X-Tornado only for the aircraft to evade them. Dr. Eggman then activated E-90's Super Sweeper and attempted to suck in Sonic himself, only for the X-Tornado to destroy the Super Sweeper. Out of options, Dr. Eggman let the robot's midsection loose to increase speed and gain altitude. E-90 soon managed to get behind the X Tornado and fired another round of missiles as several of the X-Tornado's functions and Sonic were now frozen with the cold of space. Thanks to Tails' quick thinking and Chis' assistance using a Ring though, Sonic unfroze himself as the missiles gained on the X Tornado. Sonic proceeded to destroy the projectiles before diving into the mouth of E-90, finally destroying it.[1]

In aerial combat, Super Sweeper was nearly unbeatable. It was equipped with powerful missiles and lasers, a powerful suction force, and the ability to fly higher and faster than the Tornado 2. It also possessed a force-field that could withstand a rain of lasers without a scratch.[1] 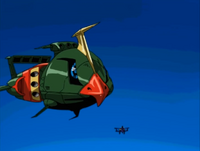