E-88 Lightning Bird, from "How to Catch a Hedgehog".

"How to Catch a Hedgehog" (only appearance)

E-88 Lightning Bird (E - 88 (イダテンバード), E - 88 (Idatenbādo)?) is a character that appears in the anime series Sonic X. It is an ostrich-like E-Series robot created by Doctor Eggman.

During a confrontation with Sonic the Hedgehog and Amy Rose at a rural farm, Dr. Eggman unleashed E-88 at them. E-88 charged at Sonic, but in a surprise move changed course and abducted Amy. Dr. Eggman then decided to use Amy as a hostage to deter Sonic from attacking him. Amy tried to free herself by attacking E-88, but as the robot was holding her by her dress in its beak, her movements only endangered her by causing her garment to tear. Tails quickly appeared in the X Tornado and gave Sonic a Ring which he used to strike at E-88, but not destroy it, attack Dr. Eggman, and rescue Amy. In the midst of this however, one of E-88's components fell into Sonic's ear.[2]

Damaged from the fight, E-88 would stay on the ranch it had battled Sonic on. The robot was later being chased by cows throughout the ranch before the blue hedgehog returned to destroy it two days later. Discovering the robot's component trapped in Sonic's head was causing him to run uncontrollably, Tails and Amy sought to destroy E-88. Amy attacked E-88 from the wing of the X Tornado, but E-88 dodged her attack and trapped her in an electrified net, which resulted in one of its legs falling loose and giving Sonic the opportunity to finally destroy it once and for all.[2]

E-88 Lightning Bird can shoot blinding light from its mouth and an energy net from its chest which electrocutes those that touch it. It has fairly fast movements and reflexes, being able to dodge a charge from the X Tornado with only a couple of meters to spare, and is capable of flight. It is also incredibly durable, being able to withstand a direct Ring-enhanced attack from Sonic and still continue to operate, albeit only just barely.[2] 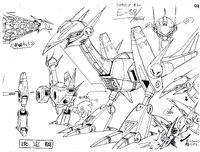 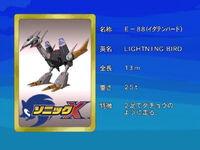