E-70 Noizi is a character that appears from the anime series Sonic X. It was a tall, red robot equipped with powerful ultrasonic wave generators created by Dr. Eggman.

When discovering Rouge the Bat and Topaz inside the Chaos Emerald room in Dr. Eggman's Fortress, the Chaos Emerald's security detail, E-70 Noizi, was activated by their presence. It attempted to try and restrain Rouge and Topaz, but only succeeded in capturing the latter. Rouge then went on the offensive, but faltered in her attack due to the loudness of Noizi's powerful speakers. Noizi's attack also doubled as a burglar alarm, and an E-12 Behemoth, E-13 Guardbot and E-14 Sneezer were dispatched to reinforce it. The Guardbot led the charge and fired on Rouge, almost hitting Noizi and causing it to cease its attack momentarily as Sneezer proceeded to fire missiles upon Rouge. Rouge went for another attack on Noizi, but the robot's attacks were still too much for her. E-13 Guardbot then took over and tried shooting Rouge again. Rouge soon returned though and threw a remote-controlled bomb into Noizi's speaker and told Topaz to detonate the bomb. As Noizi's speaker was destroyed, Rouge finally managed to defeat the robot with her Screw Kick attack, causing it to explode in a massive fireball shortly after she and Topaz made their escape.[1] 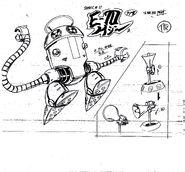