E-66 Da-Dai-Oh looks like a large black metallic dome with red glass pieces arranged in a pattern on its front. It has brown cable-like arms with black maces with gray spikes for hands, a round undercarriage underneath its dome, and two legs. Its legs has brown thighs and heavily armored black lower legs with round gray kneepads, red ankelbands, and large feet with two spikes each for toes. It also has a dome-shaped head with a red, yellow and green eye, and a tall fin on top.

While Dr. Eggman, Decoe and Bocoe followed Chris, Tails, Cream, Cheese, Frances and Danny, whom Eggman believed to be searching for a Chaos Emerald, through a mountainous Japanese region, the doctor had enough of walking and decided to use one of his robots. Using his Selection Machine to choose E-66 Da-Dai-Oh, the robot quickly vacated the submerged Egg Fort II and emerged from beneath the ocean and flew to its master's location. After arriving, Dr. Eggman, Decoe and Bocoe took passenger seats in the E-66's head and confronted the search party with it, demanding the Chaos Emerald. When the group said they knew nothing about a Chaos Emerald, Dr. Eggman took their word as lies and ordered Da-Dai-Oh to attack, but all it took was one step from E-66 to cause an earth slide beneath its feet due to the soft soil. This caused E-66 to crash into a nearby river, resulting in the water feeding a local Chao colony getting muddled up.[2]

Furious, Eggman had E-66 get off the mountain to be cleaned. Just after Decoe and Bocoe finished cleaning E-66 however, Sonic approached the trio of villains and questioned them of their presence, to which the trio replied that they simply on vacation. Eggman then ordered E-66 to attack Sonic, but Sonic dodged it with ease. Sonic then destroyed E-66 by charging through it, sending the trio of villains flying into the horizon.[2]

E-66 Da-Dai-Oh is capable of flight and possesses incredible strength matching its size, enough to make the earth crack with a single punch. It also possesses spiked maces for hands that gives it a deadly offensive and extendable arms, giving it a wide attack range.[2]

Because E-66 Da-Dai-Oh is too large and heavy, its movements are slow.[1] 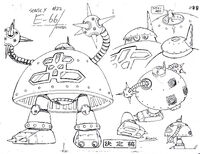 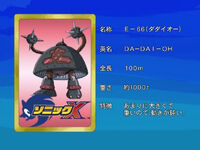