E-57 Clurken (クラーケン, Kurāken?) is a character that appears in the anime series Sonic X. It is a robot created by Doctor Eggman.

Clurken is a large robot several times of Sonic's size. It resembles a large jellyfish that has a lavender body with two yellow cylindrical sections and in between, a section of Clurken's body has red cores embedded on it. It is surrounded by a large hemisphere-shaped dome that appears clear although small areas of it can flash with multiple colours. Attached to its main body are several white tentacles each with a lavender nozzle at the end.

When discovering that Sonic and his friends were diving underwater in search of a Chaos Emerald which they refused to give up to him, Dr. Eggman deployed E-57 Clurken to attack Sonic. It initially had the upper hand thanks to Sonic's inability to swim, using powerful tentacle attacks and firing torpedoes at the hedgehog. The two of them eventually surfaced and Clurken proceeded to tauntingly bounce the hedgehog on its tentacles, knowing Sonic had nowhere to run. Thankfully, Sam Speed came to the rescue on a water scooter and tossed the hedgehog a water ski rope to tow him with. Clurken launched a flurry of missiles but was unable to hit Sonic. Tails then came to Sonic's aid with a Ring which spelled the end for Clurken, as Sonic quickly used his Spin Attack and destroyed the robot.[2] 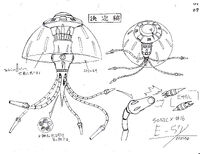