E-42 Torole is a character that appears in the anime series Sonic X. It is a bipedal walker robot armed with a wrecking ball that measures 12 meters (40 feet) tall and weighs 40 tons.

Arriving later in Station Square in his new Egg Fort, Dr. Eggman sought to demolish the city and built a new fortress for himself on its ruins. To do this, he dropped dozens of E-42 Toroles down on to the city, who proceeded to crush everything in their sight, eventually trapping Tails, Amy, Chris, Cream, Cheese and Ella before Sonic arrived to destroy several of the E-42 Toroles in a flash. Undeterred, Dr. Eggman launched a missile attack on Sonic, who deftly got the rockets to follow him and destroy several more Toroles before finishing off the rest himself.[1] 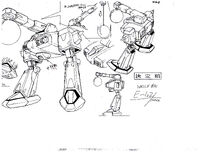 E-Series
Retrieved from "https://sonic.fandom.com/wiki/E-42_Torole?oldid=2346945"
Community content is available under CC-BY-SA unless otherwise noted.