E-39 Quizon (クワイゾン, Kuwaizon?) is a character that appears in the anime series Sonic X. It is a construction robot with four arms with various tools.

With new plans to create Eggman's Scream Park on Emerald Coast, Dr. Eggman deployed E-38 Octoron to attack Emerald Coast to make way for dozens of E-39 Quizons to tear down and remodel the site. More than eager to fulfill their task, the Quizons began scaling buildings en mass and demolishing them in record time before replacing them with statues of Dr. Eggman, rides and attractions. The Quizons then rounded up the remaining attendees at Hotel de Blanc's opening ceremony to force them to be the first guests of Eggman's new park, which included Christopher Thorndyke, Mr. Tanaka and Ella. Sonic quickly appeared though, toppling a tower and taking several Quizons with it. Octoron then crawled out of the ocean to do battle with Sonic, who destroyed it with aid from Amy Rose. Not done yet, Dr. Eggman ordered the Quizons to combine, forming Serpenter and accidentally destroying a seashell bracelet Amy had made for Sonic. Sonic then proceeded to gode Serpenter into attacking and a crying Amy suddenly became enraged and attacked Serpenter, cutting the robot down to size with every blow of her hammer until she could finally smash the head of the robot and destroy it.[1] 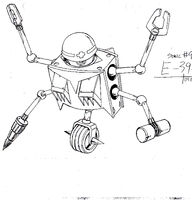 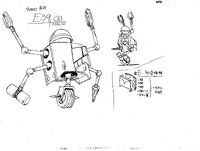 E-Series
Retrieved from "https://sonic.fandom.com/wiki/E-39_Quizon?oldid=2299159"
Community content is available under CC-BY-SA unless otherwise noted.