E-21 Ballios (E-21 (ボリオス), E-21 (Boriosu)?) is a character that appears in the anime series Sonic X. It is a mass-produced E-Series robot created by Dr. Eggman and designed for playing baseball.

Ballios has a black metallic body reading the words "Eggs" on its chest and its shoulders bulge out resembling an American football player. It stands on its black feet with silver and purple-colored legs with yellow spots. It also has blue eyes and wears a black helmet with a yellow "E" on its silver and purple colored head.

After stealing one of two Chaos Emeralds at Diamond Stadium, Dr. Eggman challenged Sonic the Hedgehog and his friends to a game of baseball in the stadium, with the winner getting to claim both Emeralds. When Sonic arrived with enough of his friends to form a team, Dr. Eggman introduced his own baseball team in the form of seven E-21 Ballios units and himself. They quickly struck out Chris Thorndyke with their incredible fastballs, then start playing dirty using their extending arms to get a strike on Tails. Amy then retaliates by using her Piko Piko Hammer instead of a bat and the Ballios units got her out by throwing one of their own into the air to catch the ball. When Amy started pitching later on she dismantled a Ballios by directly hitting the batter with a powerful curveball. The Ballios continued to use their extending limbs to their advantage to jump over the other players and get to bases. One Ballios also hit a Home Run out of the park, while another pitcher got dismantled by Amy as she was batting, but Dr. Eggman's team still gained the lead by four runs. The Ballios' targeting system ended up being its own undoing, however, when confronted with Cheese. Pitching against a creature of such small size resulted in it throwing weak pitches and resulted in a walk for Cheese after four balls and an admonishment from Dr. Eggman. Next up to bat was Cream, and through some advice from Chuck Thorndyke, she made the Ballios that was pitching blush and earned herself a walk after it dropped the ball. With the game all tied up at 35 to 35, the deciding moment came down to an Ballios trying to strikeout Chris Thorndyke. Three strikes were scored, but thanks to a fumble from the receiving Ballios, Chris managed to score a run and win the game. With one last dirty trick up his sleeve, Dr. Eggman ordered a Ballios to detach its head and attach it to Sonic's scalp and explode to get the game called off, pretending it was a malfunction. With Sonic and Knuckles distracted destroying the explosive, Dr. Eggman cut his losses and fled with his single Chaos Emerald while the rest of the Ballios managed to escape in the ship from where they were deployed.[2]

While usually soulless machines, the Ballios robots do possess a limited degree of autonomy, being able to express feelings like frustration or exasperation. They can even get emotionally incapacitated by things like cuteness; when Cream used her cuteness to appeal to a Ballios, it blushed so much that it could barely throw a ball.[2]

Being built for the purposes of playing baseball, Ballios are built as an athletic robot, being both excellent pitchers and batters. They are able to extend their arms and legs across long distances to their advantage when throwing or catching balls, and possess a significant deal of super strength; they can throw accurate pitches moving at high-speeds, bat away pitches across far distances or even throw another Ballios (which each weighs 120 kg) up into the air. Ballios also have the ability to detach their heads. Their heads have a jet on the bottom which allows them to fly once detached, and they can grow claws to attach themselves to a target and then blow themselves up.[2]

Ballios robots appear to be fragile; as seen when Amy threw and batted pitches, they break fairly easily. Their heads also need to charge up before exploding, giving their target time to get out of range of the explosion.[2] 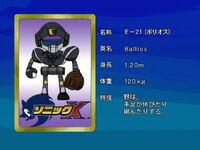